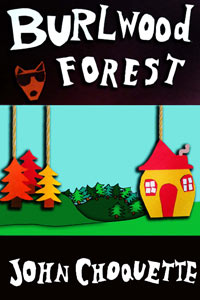 It didn't take very long after starting Burlwood Forest for me to think that my 10 year old daughter would probably like this book. It's imaginative, quirky, and written from the perspective of a kid right about her age who doesn't quite fit in. Sure enough, she curled up on the couch with it and I heard her giggling. Very soon, she was lost in the world of Burlwood Forest.

It's hard to describe exactly what this book is; the style is reminiscent of Diary of a Wimpy Kid (but without relying on bad examples for humor), with a little Lemony Snicket flavor, and the plot takes you to a magic forest, Narnia-style. But it's really hard to draw exact comparisons as Burlwood is pretty unique.

The basic premise of the story is about an awkward boy named Michael, who isn't quite as successful at this thing called life as he'd hoped he would be. He becomes the unlikely hero of a mission to find and defeat the evil Lord Piper. Michael finds himself smack in the middle of the adventure, just figuring it out as he goes along, and you can't help but cheer him on. There's a smorgasbord of characters to meet along the way as he travels through a magic forest, and the whole journey is unpredictable and really captures the imagination. At times, however, some of the characters and elements thrown in seemed a little nonsensical or unclear, and my daughter and I both found ourselves feeling confused.

Overall, if you like fantasy and adventure, magic, silliness, and wit, and a book (refreshingly) without anything objectionable, you'll really like this one. It's written to be a book your kids will laugh through and enjoy. The end leaves you hanging, though, so be prepared to need the sequel.