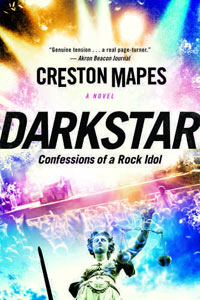 This is not your typical rags-to-riches story. More like rage-to-redemption. Everett Lester is the multi-million-dollar-making front man for a wildly popular, heavy-metal rock band. He has the power to lead youth with his charisma and one woman is bent on using it for evil. But a teenage girl, inspired to pray for him from afar, is the only one who can change his course-or at least her God is. This idea of a young woman praying for a rock idol intrigued me right away. After all, how many times have I felt the need to do the same for someone in the limelight today? This is a story of what could happen if we all sought God's redeeming mercy rather than our own judgment when we witness the destructive nature of sin.

Dark Star: Confessions of a Rock Idol is told as a memoir of a man on trial for murder, recounting the reckless rock-star life that brought him there. The courtroom drama is juxtaposed with the recounting of his fame and memories from his youth. Though some may find it jolting to jump between times so quickly, it's what makes the story work. We see three different seasons of this man's life leading either to a triumph or a fall. Which will it be and how will God use it for His Glory?

One of the things I love about Darkstar is how Mr. Mapes-as he does with many of his books-displays the "new Christian" in this novel. He is the only Christian fiction author I've read so far (and I've read many) who so accurately portrays the early stages new Christians often go through as they look back on a life, centered on self, and how they feel a need to "cleanse" everyone they know of the sin that saturates them. In fact, he shows a myriad of characters in varying stages and manifestations of Christianity. The young girl, repenting after sin, the father struggling with the choices of doing what's right and doing what looks good, the sister thumping her Bible hoping to save her brother, and the out-of-control rock star, looking for meaning and worth and finding none. Mr. Mapes judges none and gives hope for all. The themes involving the occult and self-worship even ring true to this reviewer.

Darkstar is a book about a life that may be averse to some who've grown up in the church, but it is written in such a way as to get right to the point without immersing the reader in a graphic blood-bath. The reader will come away inspired that God is a powerful God, bent on doing powerful works from the deepest of pits. Just the kind of God Everett Lester, and the rest of us, need Him to be.