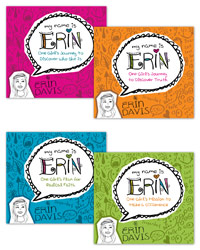 Erin Davis
My Name Is Erin

Many debuts in the world of literature show obvious signs of immaturity and, what's worse, egotism. Writers have a vast and unfortunate tendency to believe themselves the best thing to happen to literature since the printing press. Being a beginner once myself, it's very easy for me to recognize the signs of a new writer. In her four-part debut My Name is Erin, Erin Davis displays some signs of being new to the writing scene, but none of the egotistical bent that too many writers suffer from.

Davis, once a history teacher with a successful career and promising future, gave up everything she could see in her future to follow what God was calling her to do: write books that would encourage young girls everywhere to pursue their God-given calls and self-worth. She and her husband picked up everything they had and moved out into the Midwest to start a farm and live simple lives. The obedience to this call shows through Davis' clear and precise writing as she develops her ideas and moves further along in her series.

The first of her four-part devotional series is entitled One Girl's Journey to Discover Truth. In it, Davis explores what it means to read the Bible and to know God through his written Word. The fact that this was written first comes across clear in the fashion Davis wrote it in. Some of the sections moved along too fast with a need for elaboration, and some were the opposite. Topics like eating disorders and discovering sexuality are touched upon but never with an in-depth take, which would have been really nice to have in a culture where the ones who air out the laundry are the ones who can't be trusted: movies, negatively-based music, biased journalism, skewed literature, etc. However, despite the mistakes, it can be seen that all of the advice and what Davis says is culturally relevant to what young girls today face.

One Girl's Journey to Discover Who She Is is the second part of the series. Davis discusses in this the importance and gift it is to be made a girl in the image of God, and how as a girl one can reflect the qualities of God that are woven into one's very spirit to exhibit. This outing with Davis was far more concise and to-the-point than the previous one. She displays excellent skill in conveying the positive message of how good it is to be made how one is made (and no way else) to every young girl who will read this book. The writing here is never shallow and touches exactly where it needs to. As opposed to the previous topics, Davis shows no qualms about bringing up extremely controversial topics such as erasing gender from the minds and vocabularies of today's children. From this springboard, she launches forth in a bold march to why it's good to be made a girl, and why it's good to be proud of being a girl.

Third in the series is One Girl's Mission to Make A Difference. From the whirlwind Davis has taken us on, we're placed onto a slow-moving boat that becomes a welcome change of pace. This book discusses the importance of living for Christ, no matter what it is that you do. Anything that you are called to do will make a difference if you work at it under God's call. Davis explores what it means to have an inexplicable passion--that girls should discover what this passion is, not what it means. The call may be very unclear, but if the passion is there, God will use it in some way. Davis illustrates this point very effectively with showing how she gave up everything she had worked for to pursue her love of writing, all because God called her out to do so.

Within the framework of this devotional, Davis never strays into the camp of boasting and rides the line of keeping everything relevant not only to girls in today's culture, but with every person confused about their call or passion that may pick up this book and read it. This outing also sees more depth and less repetition. However, if later editions come out, I would advise Davis to lean on a heavier stick of going directly to God and asking any questions instead of endeavoring to learn the answer on one's own efforts.

Finally, we reach the last outing: One Girl's Plan for Radical Faith. Davis outlines that only radical, moving faith will change not only us, but the world as well. Young girls everywhere will find encouragement in her call to becoming who God has created them to be. While this final endeavor can be applauded for its outspokenness, it appeared that Davis lost a little momentum in some places and thus lost her punch. Some passages could have been shortened to be more effective, while others filled out, as we see with the beginning of the series, and I found myself wishing the writing strayed more into elaboration and away from succinct wording. Near the end came a point I disagreed with, as well: Davis states that God's voice can be heard today, but that's not often the case and in order to find Him for sure, we need to go to the written Word. While I agree the Word is important, it is untrue that the main way to hear God is through one medium. If our hearts are open and willing to hear anything He has to say, God will speak in any way possible, and one way that occurs very frequently today is through directly speaking to His children.

Despite its flaws, My Name is Erin carries realness and sensibility hardly seen today in the literary market. It is well, also, that Davis refrained from putting too much of herself into this by way of pride and boasting. Many a good author is torn down in their endeavors should their inflated head prevent them from thinking straight. Davis does an excellent job delivering her points and her power across while remaining amiable and relatable. For this, I applaud her. Girls in this confusing postmodern, self-realization age will connect well with this series, and while our connection with Christ via relationship could have been emphasized far more, the next outing could prove to wrap all Davis' best qualities together and serve us a lovely, delectable dish. Personally, I look forward to it.

Buy It: Amazon.com (My Name is Erin: One Girl's Journey to Discover Truth - Paperback)

Buy It: Amazon.com (My Name is Erin: One Girl's Journey to Discover Who She Is - Paperback)

Buy It: Amazon.com (My Name is Erin: One Girl's Mission to Make a Difference - Paperback)

Buy It: Amazon.com (My Name is Erin: One Girl's Plan for Radical Faith - Paperback)