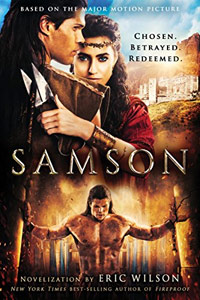 When Lew Wallace's classic story of Ben-Hur became a cultural phenomenon, it birthed a new sub-genre of historical fiction: biblical fiction. Under this banner, authors have taken well-known Bible stories and added their own twist on the tales. Characters are added, extra plot lines developed, and the internal thoughts of Bible heroes are guessed. Some of these retellings work better than others. Now, Pureflix is adding their take on the famous Samson story from Judges 13-16 with a new movie and Eric Wilson is tasked with fleshing the screenplay out in novel form. Do we have the next Ben-Hur on our hands or is this something more lackluster?

The plot roughly follows the biblical narrative, though with artistic license. Samson is 19 for most of the novel and then it jumps ahead to his downfall at an older age. He is also accompanied by a brother named Caleb and frequently butts heads with his mom and dad over his purpose and calling. Samson doesn't want to be a judge; instead he looks for other ways to bring peace. His first attempt is to marry a Philistine girl to show how the two nations could coexist. This hopeful union, however, is spoiled by the book's villain, Prince Rallah. Here, Rallah is tasked by his paranoid father to find a way to stop Samson. Rallah's main squeeze, none other than Delilah, tries helping the prince, although she questions her love after meeting the Hebrew hero. Rallah and Samson go back and forth in victories and defeats throughout their lives to the point of obsession for the Philistine prince, who has delusions of grandeur and hopes to take the throne from his father.

The narrative technique that Wilson uses involves jumping between Samson's first person perspective and a third person narrator for other characters, depending on the chapter. It takes a while to get used to this device, though. The opening chapter also begins close to the end before flashing back to the past. The jump is jarring and leaves the reader questioning, due to the constant shift of narrative voice, when we'll return to the "present day." The language used is also very colloquial and occasionally takes the reader out of the story. For instance, at one point, a character uses the word "hubbub," which makes the Hebrew character sound like a 20th century dad. It doesn't need to be King James English, but some formality would have helped it feel more authentic. Similes and word pictures tend to verge on being too modern or failing to pack much creative punch.

The biggest disappointment with this novel is its portrayal of Samson. Wilson tries to add interesting nuance to the legendary judge, but this never gets far enough to salvage the shortcomings of his representation. The dynamic between Samson and his family is cliché and his waffling back and forth between obedience to God and following his own wants is never satisfyingly addressed. Samson is supposed to be portrayed as conflicted, but the conflict never feels genuine. One minute he sins, the next he feels like everything is okay and he's back to being God's weapon against the Philistines. The Bible seems to sketch Samson as obstinate and self-absorbed and the novel only gives hints to this. Yes, the task is to make Samson more sympathetic, but should he be? Maybe preconceived notions mar his arc in the story, but it could have been made more compelling than it was.

There are some highlights to this novel, however, one being the subplot involving Rallah. He acts as a parallel to Samson, with poor relationships with his father and Delilah, but his story and machinations are often more engaging than Samson's. Some of this could be attributed to reverting to a third-person narration for Rallah, which cuts down some of the colloquial problems. Making Delilah, and the Philistines in general, sympathetic also worked in its own way. The idea that everyone was suffering beneath the tyranny of the king and that it was, technically, possible for the Israelites and Philistines to live at peace raises intriguing questions. However, the reason why they could never live in harmony (according to the Law) is never explored. The strongest moments of this novel, though, are the action sequences. Wilson has a good eye for describing a fight in a thrilling and terrifying way simultaneously.

The task of taking a screenplay and turning it into a novel is a daunting one. To a point, the author is limited by what other writers have constructed. That makes a critique harder as well, for what can be attributed to the script writers and what to the novelization author? I've yet to read anything else by Wilson and I don't know if I should judge him on his effort here. In many ways, Samson reminded me of Ben-Hur. Both Wilson and Wallace write in a style that is slightly above amateur, but not quite professional. The potential is there, but not quite attained. Lovers of biblical fiction will appreciate Wilson's effort and probably enjoy this novel. Others may prefer seeing the movie instead.