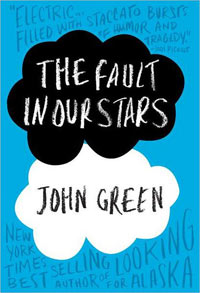 John Green
The Fault in Our Stars

Inexplicably popular books take up the vast majority of shelf space in bookstores across the country. When John Green's The Fault in Our Stars was released, I had heard about it briefly and saw the rave reviews come flooding in. The only reason I could think of for this sudden, acclaimed reception was that John Green is the author. Only, I hadn't yet discovered that in order to fully determine the quality of something one has no clue of, one must endeavor to investigate said thing to make a concrete proclamation. Consequently, as a good reviewer and reader always should, I took it upon myself to investigate this book before the movie comes out on June 6th. The Fault in Our Stars proves to be a lovely--albeit heartbreaking--story sometimes clogged by forced existentialism.

The story begins in Indianapolis with sixteen-year-old Hazel Grace attending her cancer support group. She has had thyroid cancer all her life, and it has spread to her lungs despite the lack of tumors in her body at the moment we meet her. In the support group one day, she meets a seventeen-year-old osteosarcoma survivor, and consequential amputee, named Augustus Waters. The two hit it off, and we begin to see that they're both incredibly smart and genuinely fond of one another. The relationship blooms over the course of the story as Augustus manages to help one of Hazel's dreams come true: to meet her favorite author and find out how a cliffhanger novel that the man wrote turns out.

The characters in Green's novel are very, very well drawn and developed on a real scale; I found it incredibly easy to think that this is a story that could have happened with currently-existing people. The emotional rollercoaster Green sends us on is a sort of thing that happens every day, and granted, I think anyone who picks this up and knows that both of the characters are at-risk for cancer recurrence. Nonetheless, the description of what happens (I refuse to tell you) is so accurate, that my heart squeezed in on itself the further in I read. For those of us who have had failing loved ones, Green's novel makes it a process that comes as a thing easier to accept than do a lot of novels along these medical-story veins.

While the characterization and story was believable, poignant, and very well done, there are moments within the novel that clog it beyond being reasonable. For instance, what drags the story down is the frequent--and often indecipherable--existentialist parallels that Augustus makes. Hazel, in fact, makes observations about life and the way the world weaves itself together with meetings and partings in beautiful little snippets; for instance, she makes several references in different places about how the shadows and light mingle together when trees cast the shadows of their branches on her and Augustus. Augustus has an unfortunate tendency to ramble and make little to no sense when speaking of...well, whatever it is he starts trying to sound important about. Overall, the story itself progressed nicely: beginning, middle, end, filled with complications and obstacles and pain, as a good story should be. The thing that dragged it down was the forced philosophy.

Alcohol and drugs didn't play a massive part in the story, but they were certainly present: Peter van Houten drinks frequently to avoid life, Hazel and Augustus have champagne a few times, and Augustus has cigarettes he holds in his mouth but doesn't smoke (as a symbolic representation of facing that which can kill you only if you let it). I don't think prescription meds count as "drugs" here, but they're in the novel too. The only "violent" action would be when Hazel flips Peter's scotch glass up in his face after he's very rude to her. Profanity is present throughout; nothing gratuitous, however. As for sensuality, two people are seen making out in public, and Hazel and Augustus do end up having sex, though we are not shown it.

After having read and evaluated how The Fault in Our Stars reached popularity, I can see how Green's writing skill in storytelling and developing earns well-deserved praise. However, everything that could have been cut and replaced to avoid clunkiness and clogging, should have had that done so. Here we are, though, with a final product that is good, but not the best it could be. In terms of connecting humans as we are where we stand, I think Green does a lovely job there. Despite its flaws, The Fault in Our Stars is an excellent story, reminding us that indeed we are limited in our time here on Earth. Every second counts, but not every second needs to be filled with meaningless attempts at forcing philosophy into our lives. God will lead us if we let Him; and when He becomes all we need, He Himself shows us the beauty in His life, as well as the beauty in our deaths.