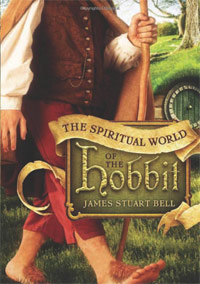 James Stuart Bell
The Spiritual World of the Hobbit

As Tolkien's good friend, C.S. Lewis once said, "Reason is the natural organ of truth, but imagination is the organ of meaning." He and Tolkien seemed to believe the best way to help people understand Christianity was to demonstrate its constructs through the art of fiction. This is why the book The Spiritual World of the Hobbit, by James Stuart Bell, intrigued me. Having been a great fan of The Lord of the Rings Trilogy (admittedly through the movies first) and found the spiritual elements profound metaphorical teaching tools, I couldn't wait to dive into the spiritual depths of its precursor, The Hobbit. But maybe I raised my hopes and expectations a little too high, for as even Mr. Bell states in the book, "Do we really need another book about this book?"

J.R.R. Tolkien was, by all accounts, a deeply religious man, so it stands to reason his spiritual worldview would be found in his writing. The question for me, after reading this book, is how much of the elements mentioned could just as easily be said of many other stories, written from completely secular worldviews, as simply elements of good storytelling? In fact, many of these are given in lectures and story-crafting seminars as a means to engage the reader. Tolkien, as a professor of literature, would know this as well. Such story elements presented here include concepts of character growth through hardships, having a divine guide (or mentor) and last-minute providential rescues.

Can it be said that The Hobbit is only a good story? Did Mr. Bell find where it transcends the craft into the spiritual? Yes. First, in Tolkien's choice of main character. Bilbo was not born a hero, and though he had much room for growth, it's his hero-less qualities that are found to be his greatest gifts--humility and mercy--making him stand out from the crowd of likely protagonists. Providence uses these characteristics not to glorify the man (as in the usual adventure), but The Divine who created the man for His purposes.

There are many other such elements espoused in The Spiritual World of the Hobbit. Some which border on stretching to make them spiritual, like the use of eagles and rest. Others parallel biblical elements well, such as the use of song and prophecy, and the downfall that comes with pride. James Stuart Bell details these and provides biblical references to back his assertions up.

Additionally, he expounds on many ideas referencing Tolkien's other works describing Middle Earth, The Silmarillion and The Lord of the Rings. I found this exercise a little wearying at times; having not read The Simarillion, and needing to juggle all the new information he summarized so as to understand the supposed meaning behind the adventures of a simple man. I wondered, therefore, if it would be more accurate to title this book, The Spiritual World of Tolkien, or The Spiritual World of Middle Earth. The reader would then be better prepared for the entirety of the world in which they were expected to journey. Though, I suppose it could not capitalize as well from the release of the movie this past fall.

The Hobbit, in my opinion, is Tolkien's least spiritual book, having been his first, and a place where he began a story. Middle Earth's spiritual world sprang from this beginning and was refined through his later writings, even though they spoke of its past. As even James Stuart Bell must agree, if one wants to really delve into the spiritual world of this setting and its characters, he or she should read the entirety of Tolkien's works, and not just The Hobbit.