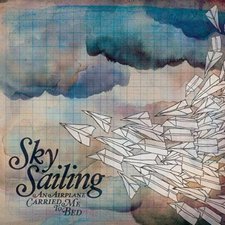 Sky Sailing
An Airplane Carried Me to Bed

It would be a difficult thing to argue if I said that Owl City could easily be placed in the top ten pop artists in the country. Adam Young became mega popular in mid-2009, thanks partially to iTunes and partially to Universal Records. Before that, he had two independently-released albums under the Owl City name, but even before those albums were created, Young had made music under plenty of other obscure names. In 2010, thanks again to Universal (along with Young's willingness), Owl City fans got a little taste of one of his previous projects, the acoustic-based Sky Sailing. The formerly-independent album An Airplane Carried Me To Bed saw the light of day after many years, and made its way into the hands of lots of new fans.

Many compared the sound of Owl City to the sound of the Ben Gibbard project The Postal Service. What's interesting (and probably expected) is that Sky Sailing's acoustic sound is pretty similar to Gibbard's indie band Death Cab For Cutie. They're not completely identical, but they do have their similarities. Adam Young does sing like Gibbard quite a bit; however, Young does have a tendency to use auto tune on occasion, while Gibbard does not. But there's no confusing Sky Sailing and Death Cab when it comes down to it. An Airplane Carried Me To Bed is Adam Young through and through. Everything that fans love about Owl City, they'll find in Sky Sailing, other than the most electronic elements, which are overall traded for acoustic guitars and pianos (with a few other instruments thrown in here or there, such as accordions, drums and even a minute amount of drum pad). You'll also hear lovely string sections being utilized in songs like "A Little Opera Goes A Long Way." You can find electronic sounds as well, though, such as in the album opener "Captains of the Sky."

All the charm and beauty represented on Ocean Eyes is found on An Airplane Carried Me To Bed. Young handles his lyrics so well, with some of the best lyricism you could find in pop music (something that has been hard to find there for some time now, and is only getting more difficult). The beautiful ballad "Brielle" is written so tenderly and with such love in his heart as he sings about longing for home and his beloved. He uses such brilliant imagery that paints a picture in the listeners' minds. There's also that quirkiness that he's already known for with Owl City songs like "Dental Care" and "Rugs From Me To You." He sings about hurting himself playing tennis in "Tennis Elbow." The lyrics "Swinging down, I sent the birdie downtown at 7:30, and I'm convinced that I've got tennis elbow" aren't just part of a silly song, but are also cleverly-written. Alongside the lyrics, what's really attractive about Adam Young's music is the melodies. It's not just the things that he's singing, it's the way he's singing them. He knows exactly how to grab ahold of someone's heart and ears at the same time.

Sky Sailing is a project from a few years back, but it definitely doesn't seem to be dusty at all. The nice packaging and artwork along with the clean and clear music almost makes you wonder if Young just re-recorded all the songs for this release. The only thing that would hold this album back from being as good as it could be is that a lot of the melodies, as good as they are, almost feel copy-and-pasted. They're all different overall, but you can hear some sort of a pattern throughout them all. But his music is always a joy to listen to. He's released several singles recently as Owl City (one for Christmas and, appropriately enough, one for the soundtrack for Legend of the Guardians: The Owls of Ga'Hoole), and he has a new Owl City project scheduled for sometime in 2011, so next year should be pretty joyful. An Airplane Carried Me To Bed is a must for Owl City fans, and even fans of acoustic pop and/or great songwriting.