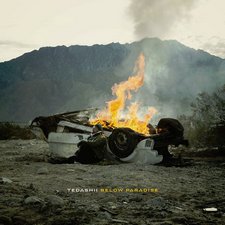 Tedashii returns to the scene after a 3-year-break since his last album, Blacklight. It may have been 3 years, but he is back to doing what he does best: releasing solid hip-hop for his fans. Below Paradise features a solid set of tracks to whet our appetites. Whether it's a banging beat or a slow R&B jam, Tedashii brings it all to the table. As expected, the record features a slew of guest appearances. While some, like Trip Lee, Lecrae, and Derek Minor are a given, others, such as Crowder, are more surprising. This is the fourth album for this Reach Records veteran, and one fans are sure to enjoy.

The album opener and title track start things off right. The track serves as an intro of sorts, but features big beats and Tedashii spitting a tough message about the world. This introduction sets the tone for the theme of the album. "Perfect" is also a track of note and features a nice flow from Tedashii. The trio that made Reach Records a staple teams up for "Nothing I Can't Do." Something special seems to happen every time Tedashii, Trip Lee, and Lecrae team up, and this one is no exception. SPZRKT (that's pronounced Spazzy Rocket if you've been wondering) is an interesting artist and his addition turns out to be pretty great. The chorus of "Fire Away" has a big open sound, but then Tedashii comes in with a rap and beat that contrasts nicely. The track almost feels like two different songs in one, but it works. "Be With You" carries an R&B vibe and is just straight up smooth. The regular version of Below Paradise ends with two more good ones. "Complicated" features newcomer Christon Gray, while "Chase" features the vocal talents of Tim Halperin. The Deluxe Edition of the album contains three additional songs. The Derek Minor-featured "On Ten" is worth the extra money you may have to fork over for the expanded version of the record, but "Earthquake," featuring KB, is probably the best of the trio.

Tedashii's return is a worthy one. Fans will likely be excited to pick this one up. It's probably not his absolute best work, but it's really good nonetheless. While not every track is extraordinary, none are necessarily bad either. Below Paradise is easily a record you can throw on and listen to from front to back. Fans will want to pick this up and add it to their collections. It's nice to see Tedashii coming back so strongly.

Though he has three stellar releases under his belt already, this time around, Tedashii has more to say than ever after the tragic turn of events in the last year in which his year-old son passed away. It's no surprise, then, that the lyrics and themes of Below Paradise are very heavy. Guest vocalist Kam Parker sets the tone immediately with the opening words of "Perfect," saying "You don't know what I've been through / Don't judge me cause you've got a past too / I know you don't know, but He knows," and Tedashii takes the reins in the verses addressing the judgment he has faced in the midst of his struggles. "Dark Days, Darker Nights" sees Tedashii spit even more verbal venom as he recounts his emotions of that fateful and haunting day ("Mad at the world, and I'm ready to kill / Hollering pain, and they letting me live / Making me sick, and they calling me ill / The mood that I'm in, I die to the fear This pain I gotta let is go"). Song after song features a combination of pain and anguish along with his experiences with family and interactions with people, though hope creeps through every so often as in "Nothing I Can't Do" and "Fire Away." One song though, "Be With You," stands out altogether in its lightheartedness as a song of love and thankfulness to his wife, a contrast which is fairly jarring. Ultimately, the album wraps with optimism, pointing back to our source of faith and hope with "Love Never Leaves" and "Chase." As strong and personal as the lyrics are, I can't be honest if I didn't say I was not blown away by the music and production itself. Is there anything really wrong with it? No. Far from that; it is solid, and definitely improves with repeated listens. But in this reviewer's ears, it is fair to say that the strength of the raps and lyrics definitely outweighed the overall production. Guest spots are frequent and eccelctic, ranging from fellow Reach emcees Lecrae, Trip Lee and Andy Mineo to the likes of David Crowder (who's haunting spot on "Angels and Demons" might be the album's biggest highlight) and Royal Taylor's Tauren Wells. - Review date: 6/13/14, Mark Rice

Below Paradise has all of the potential to be the best hip hop album listeners get this year. T-Dot spits among the best, the beats are as good as they come, and the sheer raw emotion displayed in many tracks can't be denied. Not every song is on point, but with seventeen songs, you're bound to have some slip-ups. Overall, I am sure that rap heads will be blasting Below Paradise for a long time. - 5/31/14, Kevin Hoskins of Jesusfreakhideout.com