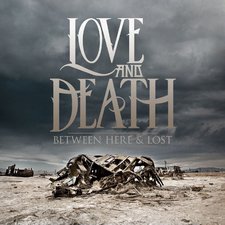 Love and Death
Between Here and Lost

Brian Head Welch made quite the move from being part of one of the most popular secular rock bands of his time to dropping a great Christian hard rock solo album back in 2008. And while he has been very busy, the Christian world has heard very little new music from him until now. To say that Between Here and Lost has been highly anticipated by fans may be an understatement. So, what's the difference from this release as Love and Death and the one as Head from 2008? Mostly, it's just the guys playing the instruments with Head, but it's still going to be solid for many fans of rock.

The album opens well with that heavy, in-your-face Korn-influenced rock sound that is a huge part of what sets this band apart from other rock bands. A large chunk of the remaining album will follow that musical style, featuring unique sounds that can only be described as Korn-like, and focus on following God in the midst of our weaknesses. Somewhere near the middle of the listen, you'll catch "I W8 4 U" a song with so many different facets that make it stand out; it just screams great metal. It goes from soft keys and slow singing and then jumps into heavy growls and pounding power chords with words of "Whatever it takes you know I won't let it break you" commanding our attention. Other standout tracks are "Watching the Bottom Fall," "Fading Away," and "Chemicals," all showcasing great sounds and chants perfect for live shows. The last track, "Bruises" delivers almost a haunting hymn feel, while wrenching words of "Now that I gave you all of my heart, why do you rip it apart?" end the album perfectly.

As far as stretching themselves musically, Love and Death don't really do that at all. If you heard 2008's Save Me from Myself, you're not going to hear too much here that's new to you. And while the overall focus lyrically is good, there are times when it is not as deep as it could be. Tracks like "By The Way," "Meltdown," and "My Disaster" could be considered fillers and fail to bring anything overly exciting or meaningful to the table. All in all, Between Here and Lost is solid and any fan of Head (or Korn) can definitely appreciate it. That being said, their unique sound isn't for everyone, and the album could easily fall in the "you'll either love it or hate it" category.

Love and Death's Between Here and Lost isn't leaps and bounds different from Head's solo release, but it most definitely contains more melodic heavy rock than his previous effort. Another key difference is Brian's comfort level with the lead vocals; he seems to have accepted a role he was once nervous to grasp onto. The album features three tracks from the Chemicals EP that released last April: "Chemicals," "Paralyzed" and the DEVO cover, "Whip It." One of the biggest complaints people may have is that it sounds too similar to Korn at times. Brian spent thirteen years as the band's guitar player and the guy has a certain style; it's going to bleed into this own material. Between Here and Lost is so much more than just a carbon copy of Korn. The record is brilliantly produced and doesn't sound anywhere near as generic as a lot of hard rock nowadays. Perhaps the production excels the most when it comes to the programming which serves as a nice filler to the rest of the musical product, never taking center stage itself. The album features some solid rockers in "The Abandoning," "My Disaster," "I W8 4 U" and the superbly done cover, "Whip It." Where Love and Death really show off is on the slower, yet powerful, track "By the Way," which is about the death of two of Brian's old friends. If you're looking for a really good heavy (alternative metal with a nu-metal influence) album with some solid melodic sections, definitely pick up Between Here is Lost. Love and Death have definitely offered up an album of solid tunes that aren't as predictable as your everyday hard rock record. - Michael Weaver, 1/21/13