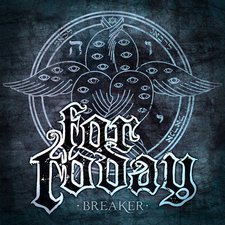 For Today has released three albums in three years. A little superfluous? Maybe, but that doesn't stop them from doing what they love: shredding, blasting, breaking and dropping. Some viewed their first album Ekklesia as a little dry, so Portraits beefed the sound right up. Along with improved musicianship and an overabundance of stellar breakdowns, they double up their skill and sound faster than most. No one would expect them to have another full-length freshly squeezed already. But lo! Breaker appears. Quite unfortunately, there is no heavy handed improvement like last time. Only what I can call a shadow of their former glory. The passion is still present, but at times it sounds like they are wandering aimlessly from breakdown to bass drop. The inspired sound is gone for the moment, but Breaker is inspired in an entirely separate way this time, spiritually. If this isn't what you expected, you best stop reading right now.

The album begins much like you would expect For Today to begin it. After the intro track, "Devastator" eases in with a brutal, drawn out build-in, and then rampages into their signature sound. The one with the almost off-tune, yet totally original guitar harmonies from Ryan Leitru and Mike Reynolds, and the Mattie Montgomery basic vocal package. You know the one. It hasn't changed since Ekklesia in 2008. Beyond that, breakdowns come and go, as well as more timing changes than I think the human brain should have to endure. It's almost like they can't decide where the tempo should be. Whether or not this is true, it is exactly what they want to sound like. Recording three albums using this formula sends a message that says "we know how we sound and we like it."

"The Advocate" passes by in a blur of slower and slower breakdowns, eventually filtering out of my attention span completely. "Seraphim" doesn't play anything new, but it's definitely a cut above the rest of the album. The standard timing changes/ breakdowns/ hardcore beat/ gang vocals pump up the same ideas, but the track is stitched together more passionately and convincingly than its neighboring tracks. The ensuing tracks don't quite break rank enough to mention specifically. Sadly, this whole album is a big disappointment. If you know For Today and heard their previous album, you won't hear anything fresh. Musically, this album is in the same vein as its predecessor, Portraits, which was a significant improvement from their debut album, but it doesn't rank the same caliber.

On the other hand, the release of Breaker is completely unnecessary. They unleashed a terrific album only last year and clearly haven't had enough time to improve or feel the need for experimentation in deviation. Musically, it is a solid album, no doubt. But the effect of attempting a release so soon again was the wrong move. I expect great and greater things from For Today in the future, at any rate. In that frame of mind, I bear no ill feelings towards this album.

After reading a recent interview (in HM Magazine) with lead vocalist Mattie Montgomery however, I am strongly convinced that the full purpose of this album was far from musical advancement alone. Breaker stands as encouragement as much or more than as entertainment. The highly zealous lyrics that always accompany For Today's chugs have been kicked up to a whole new level of purpose.

The breaker theme that the album revolves around is based on one of God's titles and roles. He breaks us. When we stew in our world and lose sight of Him, we grow stagnant in our faith. When we think there is no hope in our pitiful lives, we turn to hollow solutions rather than to our Savior. Even when there is no knowledge of the hope He provides, He sees us. He pursues us and wrestles with us until we break before the weight of His truth. He is the Breaker. The entire concept of the album can be aptly derived from the four part spoken word poem throughout. When Montgomery was given the inspiration for Breaker, he enlisted Jose Palos to write and record his own poem on the subject. What you hear between the bone crushing tracks is the result.

Musically speaking, nothing changed, nothing improved, despite a solid performance that is well recorded and mixed. Although it was a continuation of Portraits, it didn't stick the same way. There are far fewer memorable sections and far less to get excited about. After a few listens, it grows on you, but it does get repetitive once overanalyzed. Lyrically, Breaker is beautiful, enlightening, and very passionate. I was lifted up by the encouraging words. This album was certainly commissioned by God. For a good bangover, stick to Portraits, but for a spiritual mind blowing, pick up Breaker and please dedicate more than a single listen. I would go so far as to say that the actual music around the message was an afterthought.

For Today plays a self-proclaimed "metal infused hardcore" style of music, and really bring it with their third record, Breaker. In typical For Today fashion, they offer an album chock full of spiritual lyrics. Surprisingly, the lyrics are quite easy to understand despite the battling low growls and high-pitched shrieks that are the vocals throughout the album. The lyrics, "We are the only hope for a hopeless world to see the face of the living God. Take your flame, ignite the world; under the name above all names, we declare that the glorious One lives," from "Seraphim", are just a small example of what you can expect lyrically. The song is like a modern day, metal version of "This Little Light of Mine," and is definitely an album highlight. Christ-centered lyrics are not all For Today brings to the table though; you will also get loads of solid breakdowns, massive bass drops, and tightly played guitar arpeggios, which have been laced into every song. The bass drops rival that of any hip-hop or rap album, and are easily one of the best compliments to the band's music. For the most part, For Today sounds much like other bands in the genre, but it seems as if they are working hard to set themselves apart from the rest. The only real negative to the album is its length. Though there are 12 tracks, there are only 8 full songs. All of the "Breaker's" tracks ("The Breaker's Origin," "...Valley," "...Encounter," and "...Commission") are simply spoken word interludes, almost rapped at times, to light guitars and drums. The final track, "The Breaker's Commission," does, however, feature an almost choir-like section just past the half way mark of the song. All in all, this spells out a solid release for a band that appears to have a bright future. If you are a fan of hardcore or metal music, you're going to want to check this one out. - Michael Weaver, 8/22/10