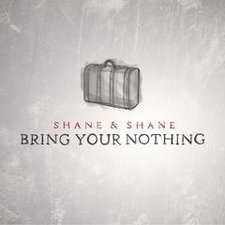 Shane & Shane
Bring Your Nothing

Thanks in part to those four gents from Britain, Mumford And Sons, earnest acoustic music, played with speed and sung with emotion and bombast has made an unlikely comeback in the digital, auto-tuned age we live in. Bands like The Lumineers, Of Monsters and Men and solo artists like Philip Phillips (an unlikely direction for an American Idol winner) have created a scene that welcomes banjos, accordions and harmonious singing.

Texas' Shane & Shane once belonged to this musical fraternity, long before it was cool. As far back as 2002's Psalms and 2003's Carry Away, this duo created a holy racket with minimal production and just the sound of two voices and two guitars. The duo's last few offerings have seen the production level increase and the overall sound smoothed out and polished up to current radio standards.

The first track on the finely titled Bring Your Nothing offers hope to longtime fans that the fellows have their ear to the musical ground and have elected to dial back the studio processing and editing a bit. "The One You'll Find" makes great use of handclaps (an age-old, tried and true percussion backdrop), banjos and earnest harmonizing to sing a lyrically honest prayer to the Lord "that I would be the one you'll find." This track has a "just right" mix of message and compelling delivery (the raw notes hit at the end of the song are an album highlight).

It's unfortunate that with track two (the title track), the album starts to fall apart. The dissonance of the "funk-lite" opening of this song, with the dated 80's era record scratching and attempted Motown falsetto vocals, sounds like a bad attempt at a boy band number, and utterly mystifies as to its placement after such an honest and earnest opening song. Though the lyrics might be spot on, the musical backdrop feels false in every way and begs the classic question "what were they thinking?"

Things rebound a bit as the album progresses, but sadly, not to the heights of the opening track. "I Came Alive" is suitably celebratory and well-delivered with its great harmony vocals and catchy hook. "Without Jesus" scores points for its takedown of empty religion that gets marketed to the masses through prosperity gospel and similar heinous distortions of what Jesus actually taught. That Shane & Shane actually dared to name names (Prosperity Gospel, the Moral Majority etc.) is to be commended. Unfortunately, "Faith To Believe" seems a pedestrian treatment of a great subject and mystery like faith.

In the end, Bring Your Nothing, with its ping-ponging sounds and styles, sounds more like a collection of songs from an artist's whole catalog than a cohesive work. In greatest hits packages, it's common to bounce around from sound to sound, period to period. But in a new album it sounds jarring and confusing. A little more thought to the overall effect of the songs as a whole would have made for an easier listening experience.

For nigh on twelve years now, the two Shanes, Barnard and Everett, have been faithfully writing, recording and releasing their particular brand of lively, slightly-folky pop compositions for the listening audience at large. A bit glossier on average than the pair of projects that preceded it, the new album, to its credit, features a slightly broader sonic palette than 2009's Everything Is Different and the equally pared-down The One You Need. This eclectic approach occasionally works to the duo's advantage, as it does on the beatbox-infused country-pop number, "That's How You Forgive," which falls somewhere near the imaginary intersection of, say, Rascal Flatts and first-album Jars of Clay. The title track's admirable, yet ultimately ill-suited, foray into 70's-inclined blue-eyed soul, on the other hand, isn't nearly as winning. Elsewhere, cuts like "You Loved My Heart to Death," which harks back to mid-'90s crooners like Clay Crosse and Michael English, land somewhere between the two extremes. The back-to-back placement of no less than four overly generic, similar-sounding pieces at the end of the release brings that portion of the record to a virtual standstill. But characteristically spritely folk-pop nuggets like "I Came Alive" and "The One You'll Find" go a long way toward compensating for the late-album slide. Neither the strongest effort in the catalog nor the ideal entry point for newcomers, Bring Your Nothing nevertheless offers just enough top-drawer material to keep the most-devoted members of the existing fan base fully engaged. - Bert Gangl, 5/15/13