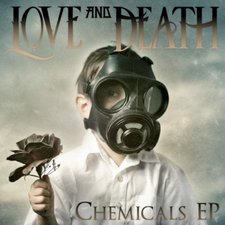 Brian "Head" Welch has come a long way since his days with secular rock band Korn. After confessing his faith in Jesus Christ in 2005, he left the band, spent more time with his daughter Jennea, and in 2008, released his first and only solo album, Save Me From Myself, an album that had both the Christian and the secular music world talking. Since then, Head has parted ways with his former label, hired a band to tour with, and performed and spoken at numerous venues across the nation. Now, Head has joined forces with his touring members to form the band Love and Death. The band's debut EP continues in the sound of Save Me From Myself with some mild instrumental and lyrical experimentation.

The 5-track EP kicks off with "Paralyzed," a track that was originally released as a solo single under the name Brian "Head" Welch. Immediately noticeable is a structure and sound that differs from Head's solo work. Although a solid and very enjoyable track that will have any rocker hitting the replay button, the song follows a much more typical and somewhat undistinguished hard rock pattern instead of the uniqueness that Head has displayed in the past. That being said, the song features solid guitar work by Head and Bareis, great clean vocals by Head and bassist Michael Valentine, awesome drumming by Dan Johnson, and of course, Head's famous screaming. Following this track is a song you may or may not recognize. "Whip It," which features guest vocals from Matt Baird of Spoken, is a cover of the famous 1980 Devo song of the same name. Not knowing this prior to listening, however, may lead you to think it's an original because it is so completely different in sound from the Devo version. The title track comes third, and is a great display of the band's musical ability and songwriting talent. Displaying heavy guitar in the intro and throughout the song mixed with impressive screaming and clean vocals, new fans of Love and Death should listen to this song first as it is very defining of the band's sound, lyrics, and overall distinguished style. Tracks four and five are simple and unimpressive remixes of "Paralyzed" and "Chemicals," respectively.

Another aspect of this EP that differs from Head's solo album is the lyrics. While Head's songs featured lyrics which were audacious and straightforward, the songs from Love and Death have a much more subtle approach. That's not to say that the band is timid by any means or that Head's faith is growing dry, as the spiritual references in these songs are quite obvious. They're just not as obvious as the songs from Save Me From Myself. "Paralyzed" is very clearly an outcry to God for help in times of complacency, but God's reference is the pronoun "You." This is not necessarily a bad thing, but it is a clear difference. "Chemicals" appears to be about Head's former drug addiction, but the song is littered with metaphors and, to the average listener, the meaning will not be completely clear.

Aside from the few and minor flaws, this is a solid record by a solid band. With their unique style, distinguished sound, and impressive talent, Love and Death will make a great addition to any hard rock or metal fan's library. You can expect to see this band climbing to new heights and reaching new listeners in the not-too-distant future.