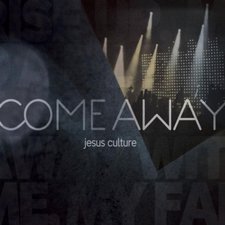 It was in 1999 when the inaugural Jesus Culture conference was held by Redding, California's Bethel Church. Soon after, the conference became a nationwide event, reaching big cities like Dallas/Fort Worth and Atlanta, and even spreading to other continents. The worship band, simply named Jesus Culture Band, formed from the youth worship band of Bethel Church, and is fronted by Kim Walker-Smith and Chris Quilala. Their latest and sixth live worship album as a band is entitled Come Away.

It was interesting to me to find out that the bass player for Jesus Culture is a Come&Live! artist, Ian McIntosh. McIntosh's C&L! album, Alive, is a fairly solid album musically, combining worship with skillful instrumentation. So those familiar with his music would probably anticipate Jesus Culture albums to be just as good, if not better. Sadly, Come Away features little to be desired in the music. It has its moments, but they rarely last. For example, "My Soul Longs For You" has a pretty cool, southern rock-style guitar line. But it just repeats over and over again with the deadly, repetitive bass drum (it was only a matter of time, right?). The drummer does add some high hat, but it doesn't help much as the bass drum thumps on for about two and a half minutes before being joined by the snare. It comes back in album closer "One Thing Remains." It's quiet and subtle, but it's there. And it's not just the drums - all of the music sounds like it was plucked from the recycling bin and rearranged a little with new lyrics. I have a hard time seeing how one can start a revolution when pretty much nothing is different.

I understand that everyone worships God in their own way, but I also understand that I'm not alone in how I worship. For worshippers like myself, albums like this always have things that are more distracting than anything. Distracting or aggravating. The spontaneous prayers, for one. I am in no way saying that prayer isn't beautiful, but I couldn't listen to these songs and stay in worship when I have to hear the same, charismatic prayers each time I listened. The same can be said for the cheers and woo's from the audience in between songs, making it sound more like a rock concert, and Kim Walker's intermittent, short spurts of laughter that can distract those with short attention spans. This may all seem rather trivial, but if the point of the album is to create an atmosphere of worship, and I find myself constantly being taken out of worship, then maybe it was something that worked wonders live for those in attendance, but doesn't translate quite as well when captured on a recording. Of course, this is why the live worship album is something that needs a break. Hillsong has been doing it for years beyond years, so we probably don't need Jesus Culture to do it too. I'd love to hear what they could do if they spent some time in a recording studio.

One thing I hear often about Jesus Culture Band is how different they are: "Don't like Hillsong United? Give Jesus Culture a try." But one listen (or even half a listen) to an album like Come Away, and it's just not the case. Admittedly, portions of Jesus Culture's songs seem to be written better, so they deserve some credit there. And I'm sure many, many lives are touched at their conferences, so their hearts are in the right place, and they're using music for what it was originally created for. But as the quality of the music is the focal point here, Come Away just doesn't do much for the ears of listeners. If you're just looking for worship songs to sing along to, this album wouldn't be a bad choice. If the music's quality is important to you, though, pass this one up.