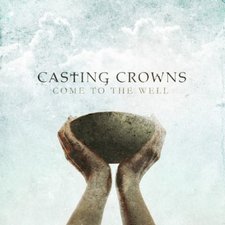 Casting Crowns
Come To The Well

Mark Stuart, lead singer of retired band Audio Adrenaline, was asked by an interviewer before the band's last concert what he thought constituted real Christian music. Was it straight up worship music with vertical lyrics of praise? Was it devotional music written to encourage believers in their walk or was it any music made by a Christian, even if the lyrics were about silly subjects or were more cryptic and wide-ranging? Stuart took a moment to answer, and then replied "there's room enough for all of it."

Those are wise words; the kingdom is big enough for all kinds of music. And there will always be a place in Christian Music for a heart-on-their-sleeve, spiritually direct band like Georgia's Casting Crowns, who boldly claim their mission is to "set discipleship to music."

Their new release, Come To The Well, continues the band's series of strongly themed albums (all with evocative cover art, Come To The Well included) that serve to hammer home a spiritual lesson in approximately twelve songs or less.

The movie-tie-in first single "Courageous" opens up the album with a surprisingly muscular guitar rift and a call for "the watchers to become warriors." This seems an apt challenge to men of God in this world who maintain spectator lifestyles and live vicariously through television shows and sports teams. The tune's bridge that features a female vocal quoting the book of Micah's call to "live justly and love mercy and walk humbly with your God" lifts the song from pleasant to thought-provoking.

The next song, "City On A Hill" has shades of a prophetic voice in the wilderness, like a Rich Mullins or a John The Baptist, and combines a dark melody with a tough critique of denominationalism. Lead singer Mark Hall doesn't pull any punches when he says "Did you hear of the city on the hill, said one old man to another, the one that once shined bright till they all started turning on each other?" The song continues in the chorus, saying "and one by one they began to run away, with their made up minds to leave it all behind." This is the best mainstream treatment of the subject of the diversity and uniqueness of the body of Christ and the plague of "rightness" that permeates the conversation of believers in the U.S. that this reviewer has ever heard. The band deserves full praise for bringing a tough subject into the spotlight.

The poignant folk-rock number "Spirit Wind" recounts the story of Ezekiel and the valley of the dry bones atop a soulful mandolin strum, and the evocative "Just Another Birthday" tells the tale of a single mother who is feeling the weight of the world on her birthday. Thankfully, the album balances out the weighter cuts with songs like "The Well," which offers an uplifting acoustic guitar and organ fueled invitation to "come to the well" of Jesus, and will no doubt serve as a great closing concert number.

I suspect to accomplish the task of speaking hard truths to the Church, like in the song "Jesus, Friend Of Sinners" where two voices plead with Jesus to "open our eyes up to the world beyond our pointing fingers," Casting Crowns had adopted a middle of the road Nashville sound that is never too threatening, but rocks competently when it needs to and serves the songs' subjects well.

So, hats off to Casting Crowns, who with Come To The Well skillfully walk the thin tightrope act of balancing a heart for ministry and discipleship with a broadly appealing (if sometimes too broadly appealing) pop rock soundtrack.

Eight years ago Casting Crowns exploded onto the music scene with their now certified platinum self-titled album. Their previous two albums have both debuted inside the top five on mainstream Billboard 200 chart which have been highlights in their well-documented career. But despite their success, critics are always been quick to point out that Casting Crowns has never really offered a truly, innovative, ground-breaking project. Does their newest album, Come To The Well, offer anything different? The short answer is not really. The formula for Casting Crowns has worked so well for them that one has to wonder why would they make any substantial changes. The lyrics remain the most appealing thing on the album. Instead of singing songs of "vertical worship," Casting Crowns looks at the practical side of the Christian life which includes many parallels to past singles. "Just Another Birthday," a story of a young woman's journey to Christ, sounds suspiciously like "Does Anybody Hear Her?," and listeners may find that the message of "The Well" and "City On The Hill" is reminiscent of other themes previously brought up by the group. But wherever the band goes, they write with God's written word in mind which has the potential to convict listeners. But before you can delve into the messages, you have to want to delve into their music. To the group's credit, it appears as though Casting Crowns put more effort into Come To The Well than other projects, but it's unlikely that they will win over any new young fans. "Courageous" is a anthemic pop rock tune which does have a reasonably catchy chorus, and "Already There" has the upbeat premise which may lead it to become a future radio single. However, the rest of the album doesn't feature any other compelling tunes, and the music appears to primarily be props to set up the messages. The only exception is "My Own Worst Enemy" which proves to be a decent rock effort. The only problem is that Mark Hall's vocal output along with female background vocals are out of their element and the rock sound may only alienate traditional fans while failing to bring out the desired audience. The bottom line is that Come To The Well is not an unbearable musical venture, and it's likely one of their better recent releases. Although their music may not be of the highest quality, those looking for lyrics that go deeper than your average contemporary worship band should consider giving at least some of Casting Crowns' latest a listen. - Nathaniel Schexnayder, 10/31/11