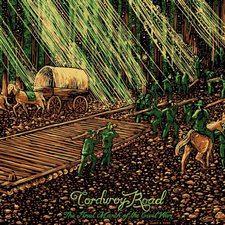 
There aren't many artists in the music industry today, Christian or otherwise, that can bring the same creativity and work ethic to the table as 30-year-old Adam Young. Young, now in the ninth month of his mammoth effort to create a new film score each month, has delivered another phenomenal soundtrack. Some might say that several of Young's recent soundtracks have become flat, repeating the same format and style. Whether that criticism is valid or not, it certainly does not seem to apply to Adam Young's latest effort, Corduroy Road: The Final March of the Civil War.

The album starts off with the touching, light "Country Hymn." The song, filled with light piano and strings (as well as a decidedly Adam Young signature acoustic guitar near the end), freshly interprets "Be Thou My Vision," and sets the tone and mood for the rest of the album. "Georgia Boys" follows well with a driving acoustic guitar. This song also seems to feature vocals by Young himself, which as far as I know is the first time he has sung in one of his soundtracks.

A couple tracks later, comes what I believe to be one of the best tracks on the album: the twangy "Sherman," based on the legendary Union General William Tecumseh Sherman. Featuring banjo, heavy claps, and more vocal samples from Young, this is a must-hear on the album.

If I have one major criticism of Corduroy Road, it's of the tone in relation to the story. One of the most important things about this kind of album is the feeling that the listener is there, viewing the story as it happens (just as in a movie). I like the overarching tone of the album, and it really does feel like being on the march with the soldiers. At times, the story deviates from this quiet march, but that isn't shown in the music. Kennesaw Mountain and Atlanta were both large-scale battles, but the same tone is carried through both of the tracks so named, for the most part. Both "Kennesaw Mountain" and "Atlanta" are good songs, but they just don't carry the story through.

In "The Deep South," the same feeling is once again captured as you can almost hear the wagon wheels creaking as General Sherman marches his troops toward Savannah. The penultimate "March To The Sea" returns to "Be Thou My Vision," this time with acoustic guitar and harmonica. For me, this really has to be the highlight of the album. The listener feels like they are sitting at the campfire, a soldier rediscovering the same hope in God they had before the bloody campaign. "Fall of the Confederacy" rounds the album out nicely, as the conflict is over, and the soldiers come home to discover their struggle has only begun.

As someone who immensely enjoys studying the War Between The States, I couldn't help but go into this album with high expectations. And Adam Young surpassed them once again. Corduroy Road may indeed be his best score album, with the possible exception of Omaha Beach. It's hard to imagine him making anything better than this, but with Adam Young, I've learned to be ready for anything.