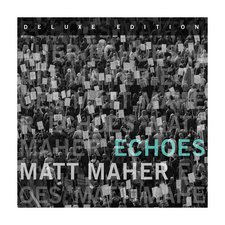 
Bonus content often carries a stigma of superfluousness. Hardcore fans will take anything they can get from their favorite artists, but the extra songs are often considered apocryphal to the canon of discography. Then again, there are cases where the exact opposite is true. The best media example I can think of is Lord of The Rings: Return of The King - the extended edition completely transforms the movie into something else entirely. Similarly, Matt Maher's latest offering, Echoes, is one of those rare exceptions to the rule since the album itself is certainly solid, but the bonus content is what seals its importance.

Tonally born out of the recent loss of his father, this album sees Maher approaching worship in a more personal and vulnerable way than his past releases. Intimate emotion is felt throughout most of the songs, particularly on the reflective "Your Love Defends Me" and the sentimental climax in "Just As I Am." This intensity makes for great solo listening, but I'd be surprised if any of these songs catch much radio attention (other than the massive cliché that is "Holy").

The passionate vein that beats throughout the album helps everything flow really well together and provide some thoughtful musical transitions that are missing from most other worship albums this year. In a sense though, that same vein is what keeps any particular tunes from standing out. It's hard to pick a song that comes across as head and shoulders above the others (unlike "You Were On The Cross" from 2009's Alive Again), but then again, that serves as a testament to the album's solid tracklist.

Maher chooses not to be very musically adventurous here. Deluxe Edition exclusive tracks "Echoes One" and "Echoes Two" provide peculiar sonic soundscapes, and "Picket Sign" is an out-of-left-field synth rocker, but everything else is the piano-driven ambience that Maher is known for. Still, the songwriting skill that is typical of Matt is perfected here, most evident on the slight dissonance in the chorus of "Just As I Am" and the gospel energy of "Clean Heart." Rising melodies and well-placed breaks abound throughout most of the songs. Perhaps as a symbol of retreat and solace, Maher borrows a lot of lyrical lines from beloved hymns (i.e. "What A Friend," "Faithfulness," "Into Your Hand"). He also allows this idea to bleed into the song structures themselves, and it makes everything feel much more liturgical.

The most bold decision made on this album is the use of political language in a non-polarizing manner. "Picket Sign" preaches "This is your protest/This is your stand/Your blood poured out/For the blood on our hands." "The Least of These" tells of Jesus as a refugee and "The Cross Forever Speaks" expresses the subversiveness of Christianity's most revered emblem. Some will say there is no place for these statements within worship, but Maher's call for unity and justice validates his creativity here.

It also makes sense that more disputatious concepts are exclusively present on the deluxe edition, but that's also what makes it so vital to the overall listening experience. These added songs feel timely and essential to Maher's intended narrative. The serenity and contentment in "As Good As It Gets" aptly ties it all together in the necessity of Christ in everything.

Echoes works best as an internal discourse on what worship looks like in the face of loss and the fallen state of society. Though Maher chooses to stay away from making grand proclamations on either of these topics, he has provided fans with reflective tunes that justify honesty in emotion. The greatest achievement here is that none of the songs feel like leftover thoughts, and even the bonus content contributes greatly to the story of a pleading for unity in Christ.