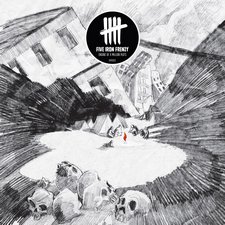 November 22nd marks 10 years since our beloved Five Iron Frenzy officially called it quits and played their then-final show in Denver, Colorado -- and also marks 2 years since they announced their "resurrection." November 26th will culminate in the final step in what has been a long awaited comeback. So, does a drawn out two-year waiting period that broke Kickstarter records prove to be worth the wait? That answer appears to be two-fold. Engine of a Million Plots is unequivocally Five Iron, yet strangely not quite the same Five Iron most fans may expect. It's well-known that Five Iron hasn't played the traditional third wave ska since All the Hype Money Can Buy and have been basically a "rock-with-horns" act; this trend continues here. The more surprising trend that does not continue is the overall goofiness found in a typical Five Iron record; it's nearly non-existent (save for "Battle Dancing Unicorns (With Glitter)"). Five Iron's comeback is likely to please most, and while disappointment is a word that is doubtful to be used, others may be a bit confused.

Track 0, "Kickstarter Introduction," opens the digital copy of the album for those who contributed to the band's Kickstarter campaign. The track is a 1:44 message/threat from Reese thanking those who contributed and threatening those not to leak it. The message is set to a Nintendo-style, 8-bit version of "It Was a Dark and Stormy Night" and is probably the funniest moment in the album as Reese candidly reminds listeners that, "...there's a pillow. And a face!" (and he intends to smother those, who leak the album, in their sleep when their girlfriends aren't around to protect them). The official opening number for Engine of a Million Plots, however, is "Against a Sea of Troubles." The song is an admirable opener and features a classic Five Iron Frenzy line as Reese sings, "My only hope is that You cannot, not be real." Next up is a personal favorite in "So Far." Musically, it's quintessential Five Iron and simply screams to be sung along to. While "So Far" really starts making it feel like a Five Iron album, "Zen & the Art of Xenophobia" brings out Reese's signature sarcasm. The lyrics focus on America's tendency to follow both Zen and Xenophobia, though maybe not in the strictest of sense of the dictionary definitions (more-so with Zen). Lines like "Lock and load just like Jesus did," and "When you play this song Al-Qaeda wins and Jesus was American," set the tone nicely.

"We Own the Skies" follows and stands out as another of the record's shining tracks. The song features some of the better musical stylings and lyrically appears to revolve around Reese's (and maybe the entire band's) decision to quit Five Iron and take a regular job. Reese sings, "A Trojan horse inside my chest is screaming for the life I left; my kingdom for a steady paycheck." "Someone Else's Problem" is the only song that resembles any actual ska music and its slower rhythm provides a change of pace. "I Am Jack's Smirking Revenge" is one of the more interesting songs present. The music is a little darker than your average Five Iron song and, lyrically, it's probably the most spiritual in nature. In the chorus Reese advises, "If you change your mind cast your nets on the other side," a reference to the quote made by Jesus after His resurrection (John 21:6), and finishes the second verse with "Win it all, but something's missing. Maybe drank the wrong Kool-Aid" (perhaps a reference to Matthew 20:16). "To Start a Fire" is up next and is a more serious track leading into the sole comedic offering. While "Battle Dancing Unicorns (With Glitter)" isn't your typical goofy Five Iron song (i.e. the better half of Our Newest Album Ever!), it is quite funny. The line, "We're about to awesome all your dreams," alone is outstanding. Reese keeps it coming with other funny quips such as, "Bet you've never met a thousand-aire," and "And you're still in high school, but have to acknowledge that we are professors at Robot Spy College." You will likely find yourself laughing more at the content than actually understanding what the song is about.

"Into Your Veins" is another interesting song along the lines of "I Am Jack's Smirking Revenge." Lyrically, Reese takes the role of a drug dealer and sings, "I am trafficking bliss; I sell wholesale with a kiss. I am a dealer of words. I'll suck the buzz from your scene and sell it right back to you before I get away clean." The song turns out to be an album highlight, but it's something a little more unexpected from Five Iron. Finally, the original Kickstarter pitch song, "It Was a Dark and Stormy Night," leads up to the closing tracks. "I've Seen the Sun" and "Blizzards and Bygones" are the only tracks in which Reese Roper did not have his hands in as the lyrics and music were written solely by Dennis Culp (former) and Scott Kerr (latter). While lyrics in the chorus of "I've Seen the Sun" may seem to be about the Son more than the sun, other lyrics such as, "You bring the warheads, I'm bringing ice cream," are a bit of a head-scratcher. All-in-all, Culp's solo contribution is a worthy addition. Kerr's "Blizzards and Bygones" is a slower song and follows in with the the winter and cold theme that plays throughout the album. It's not a bad tune, but it doesn't share the power of a closers such as "Every New Day" or "Eulogy" and leaves you wanting one more song.

While the first listen had this Five Iron Frenzy die-hard extremely disappointed, subsequent listens revealed so much more. It's probably not the album most long-time fans hoped for, but it's obviously the album the Five Iron troupe felt they needed to make. People change over a ten-year period and it seems Engine of a Million Plots is proof of that. While it's doubtful that most fans will find this to be Five Iron's greatest album -- it's just not as good musically and lyrically as some past efforts -- it is destined to be loved regardless. The wait is finally over and now only time will tell where this record will stand among the rest of the FIF catalog.

It's that time, folks. After a decade of retirement, Five Iron Frenzy has returned with arguably the most anticipated release in the industry in recent memory. And with that anticipation comes expectations that are probably unrealistically high. Fortunately, Engine of a Million Plots delivers on nearly all counts, even if it isn't the single greatest album ever recorded in modern times. The traditional Five Iron ska sound may be gone for good, but in its place is a more thoughtful, mature approach that meshes well with how much this band has undoubtedly grown in the last decade. "Someone Else's Problem" is a deadly serious highlight, with "I Am Jack's Smirking Revenge" following close behind. Of course, there's still some fun to be had, with the wonderfully anthemic "We Own the Skies," and the gloriously neurotic "Battle Dancing Unicorns (with Glitter)," which may be the best track on the album. Meanwhile, there are only a couple missteps, specifically the opening "Against a Sea of Troubles" and the melodically out-of-place chorus in "To Start a Fire." To cap it all off, "Blizzards & Bygones" is a surprisingly beautiful album closer. It might be the least ska song on the album, and it's not the straightforward worship song they used to always end with, but it is both musically beautiful and lyrically vulnerable and sincere (It sounds like it would be more at home on a Brave Saint Saturn album, and that's never a bad thing). All said, Five Iron Frenzy is back and they've still got it. - Timothy Estabrooks, 11/24/13