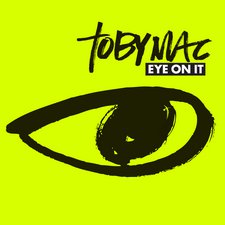 TobyMac
Eye On It

No matter how much one discusses the members of dc Talk individually, the conversation all eventually reverts back to their first project together as a trio. While longtime fans continue to revel in their finest days, Michael Tait, Kevin Max, and Toby McKeehan all continue to be prolific in the scene. While TobyMac hasn't attempted to revitalize the household name of any famous Christian rock bands (unlike Tait with the Newsboys and most recently Max with Audio Adrenaline), his solo career stays quite strong with now five original full-length albums in the bag. Eleven years' worth of material is surely impressive for any artist, but especially for what began as a solo project, Eye On It serves to top off a renowned career of a seasoned producer.

After two illustrious forays into the hip hop world, Eye On It is the third set of pure bubbly pop tunes from Toby, and it's become clear that this is the permanent direction for him to take with the widest fanbase possible. One brief glimpse back at Momentum (which is now at a stunning eleven years old) shows just how much his style has evolved from a hip hop master to a radio-thumping pop star. With Portable Sounds and Tonight still fairly strong and accessible efforts, Eye On It doesn't quite make a hat trick like fans might have hoped. This isn't to say that Toby hasn't stretched his music-making muscles in the process, however; Eye On It, as can be expected, is a broad project that extends to both the familiar and unfamiliar, and that only works to the album's favor. While the latter is a far less gimmicky track than the former, "Me Without You" and "Lose Myself" showcase Toby's abilities in the synthpop area, and the catchy and uplifting title track is the crowning arena anthem to get the blood pumping. These memorable moments of energy keep the album more than afloat.

Of course, TobyMac commands top artists to feature alongside his name, and "Forgiveness" and "Unstoppable" focus in on star appearances from Lecrae and Group 1 Crew's Blanca, respectively. "Forgiveness" is surely an album highlight, featuring a genuine look at the hard truth of the Christian's duty to forgive others ("but those who've been given much should be quicker to give it/so when the stones fly and they're aimed at you/just say, 'Forgive them Father; they know not what they do'"). "Unstoppable" is a fast-paced gem majoring on a memorable hook with Blanca filling in the gaps for a masterful duet; it's a fun, but still serious, look at the Christian's life of passion, and in typical TobyMac fashion, business and pleasure mix together with ease ("We make our moves in mysterious ways/we'd rather burn up than stick the shade/not of the his world, so we live on the run/we have our eyes set on what is to come.")

There are, lamentably, other elements that don't work as well, and the number of these is probably at its highest. Ballads, for one, are higher in quantity this time (perhaps spurred on by the success of Tonight's "City On Our Knees"), but are uncharacteristically lower in quality than usual. After the upbeat "Me Without You" comes and goes, the somewhat subdued "Steal My Show" screeches the album to an almost untimely halt early on, and "Speak Life," "Family," and "Made For Me" work much in the similar way. With the much stronger "Atmosphere," "Face of the Earth," and "All In (Letting Go)" still in somewhat recent memory, the slower attempts here pale in comparison to previous material and come in at less agreeable times on the album. "Thankful For You" and "Favorite Song" (which features Toby's Gotee Records mentee Jamie Grace) are also ardent attempts to take the music industry to a more personal level, but neither track is particularly memorable (even as the latter compares the Lord's grace to that of an infectious "favorite song"). On a more adolescent note, "Mac Daddy" is the fifth installment of the TruDog chronicles, and unfortunately, it's at an all-time low. As Truett is no longer a little boy anymore (and therefore the cutesiness no longer exists), his raps about his desire for an Apple MacBook are far less likeable than he intends, resulting in an unhesitatingly skippable track.

While both of the other dc Talk members keep themselves very much in the news, Toby continues to hold his own with Eye On It, and those continually enamored with his work won't be disappointed with his latest tinkerings; Eye On It maintains the fun and Jesus-centered atmosphere that his fans have come to know and love, and his overall tune hasn't changed much. While it's perhaps his least engaging work to date, to call this record Toby's "worst" would be an insult when listeners consider much less accomplished contemporary acts, and it truly says much about the artist's talent when his least impressive work still stands out in the crowd. Despite its weaknesses, Eye On It is a testament to good old-fashioned musicianship that gives credit to Whom it is due; the mark of an endearing album, no matter what the genre or time.

Ever since his debut, Momentum, each of TobyMac's subsequent releases have become increasingly radio friendly. On his latest, Eye On It, it seems that almost every song on the album is tailored for the radio.

TobyMac has always stretched himself as a musician, and this time around, he incorporates a lot of techno sounds and dance beats into the mix. However, instead of sounding fresh, different, or innovative, much of the project comes off as repetitive, overproduced, and mildly stale. Both the first single "Me Without You" and "Unstoppable" are layered in synth, and so is the troubled title track that is produced to death. On the other hand, catchy and competent tunes abound, including "Forgiveness" (which partially wastes an appearance by Lecrae), "Speak Life," and "Family," the latter of which attempts to recapture the magic of the hit "City On Our Knees."

As a fan of TobyMac since Welcome To Diverse City, I haven't enjoyed most aspects of TobyMac's career evolution. Eye On It isn't trendsetting; it follows trends. It doesn't raise the bar for TobyMac releases; it aims for the heights set by his older albums. However, the Mac's fifth studio effort is hopeful and fun and should impress newer fans even if it doesn't seek to return to his roots. In the end, TobyMac sings "it's always been about the music/ praying God can use it/ to set some people free" ("Thankful For You") and hopefully this album does just that. - Nathaniel Schexnayder, 8/26/12