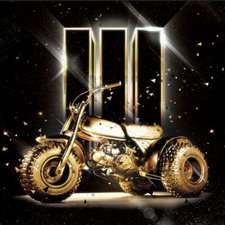 To say Family Force 5 is one of the most beloved bands in the music scene is an understatement. With success in both mainstream and Christian markets, musical proficiency and fun-loving excitement are always found in their repertoire, much to their fans' delight. With two wildly popular albums under their belts, their third studio project has been anticipated for quite some time. But even down to the album's title, III is regrettably the band's least satisfying project to date.

While the entire album isn't this way, some tracks on III tend to range from offensive to senseless. "Wobble" is harmless enough, but envisioning performing the dance described only brings a silly picture to mind ("clack your kneecaps, clack 'em together.../Wobble your legs, bobble your head/throw your arms back and forth like you're hugging yourself"). The synths of "Get On Outta Here" are impressive, but when the entire tracks consists of putdowns to an unwanted party guest, the result feels far more mean-spirited than harmless fun ("you know you're dirty and you're good for nothing/dang, sucker punch to the mouth/now you're making out with the ground").

The review of III EP summed up the female-focused "You Got It" and "Dang Girl" well enough, and "Mamacita" and "Tank Top" aren't much better. They're probably meant to be more charming than uncomfortable, but the suggestive undertones are too less-than-subtle to ignore. "Mamacita" does introduce some interesting Spanish guitar influence to the song to add to the album's variety and "Tank Top" is more meant to make fun of "the scene" than it is about ogling attractive women, but the songs' content at face value isn't exactly praiseworthy. With so many "party bands" on the scene that Family Force 5 routinely performs alongside (3OH!3, Cobra Starship, LMFAO, and Breathe Carolina, among others), gratuitous provocative themes and lyrics saturate the genre. As III seems to demonstrate, however, FF5's stark difference in this area is becoming less and less apparent. To be absolutely fair, the severity of III's content is still a far cry from any of these other bands' sexual fantasizing, but the fact that these comparisons are coming to mind is only disappointing.

Without a completely negative outcome, tracks boasting both catchiness and substance are still to be found on III. "Can You Feel It" opens the album with a murky guitar/synth hybrid and fun party-starting flair. "Paycheck" is one of the more redemptive tracks as well; telling the story of a man gone completely broke and his accompanying anxiety ("I can't afford to live this way/I barely live on what I make/running 'round for money, begging on my knees/living paycheck to paycheck"), he still comes away with a peace that everything will still turn out fine ("We'll be okay, don't you worry baby/we gonn' get paid.../it's our lucky day/'cause I found some change/I got a paycheck"). "Love Gone Wrong" shares similar themes of mishandled cash, but in the context of a harmful relationship; thankfully, it's far more comical than heartbreaking. "Not Alone" serves as III's ballad, and while it does not dig particularly deep, it still promotes Christ-like sacrificial love and reliability in relationships.

Upon a survey of Family Force 5's third studio album, the subpar result of three years of work is disheartening. The kountry gentlemen have only demonstrated their musical versatility better as the years have progressed, and in that regard, III follows suit, but instead of digging deeper on the lyrical level, themes bordering on tastelessness rise to the surface. As mentioned, some parts of III are better than the whole and are worth the attention of listeners, and one would be wise to solely invest in these aspects. However, as an entire product, III is far more a disappointment than a joy in the end.

In this life there are some things that really aren't meant to be taken too seriously: whoopee cushions, redneck jokes, Weird Al Yankovic, etc. Relatively associated with this non-seriousness have been the fellas in Family Force 5. While a couple of songs may have some hints at deep content, for the most part they are a group known for their dance party worthy southern crunk-rock. After the excellent work delivered on Dance or Die, the expectations were set pretty high for their third release, III.

Instrumentally, the album features some of the best musicianship the guys have ever given listeners. "Can You Feel It," "Paycheck, " and "Dang Girl" feature the harder rock sound that fans have grown accustomed to while "You Got It," "Mamacita," and "Tank Top" venture into a modern party pop sound. Musically, it will get your feet tapping and hands clapping to the groove. Melodically, Solomon is at his best and there are some excellent harmonies.

Unfortunately, lyrically, it is some of the most immature lyrics to come from the fellas. Yes, they are known for their raucous party music, which is always enjoyable, but this go-around, it's almost all about the same content: girls, girls, girls. On top of that, it's all about the surface beauty of a girl - the fact that she looks "good" or by the way her body moves. The lyrics seem so shallow that it's difficult to listen to after too long.

When approaching an FF5 album, the listener needs to expect that it's not going to be too serious. It's going to be about having a good time and knowing how to party. But with this album, it feels like an awkward step backward. For this listener the third time is not a charm. - Ryan Barbee, 10/13/11