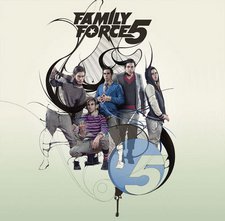 In 2005, Family Force 5 began to turn heads with their high energy crunk rock show even before releasing their debut album early the following year. Business Up Front, Party In The Back won over many fans who quickly and passionately embraced the fun vibe and infectious feel of their songs. In 2008, the Atlanta quintet ventured into more of a dance rock territory with Dance Or Die as they tried to stay a step ahead of the musical trends. While fans of their debut had a hard time swallowing the stylistic shift, the band didn't lose the heart and core of who they are as a band. As we near the release of their third studio album later this year, the guys release III EP, a sampler of sorts of what fans can expect next, and it may surprise even their most devoted listeners.

Despite getting their break in the Christian market first via Gotee Records, the FF5 bunch have successfully infiltrated the mainstream market as well, hardly forsaking their beliefs or intentions to "party for Jesus," as they have said many times from the stage. Their songs have never been especially forthcoming about their faith, but the partying has always been benign and fun, something that isn't too commonly found in mainstream music these days. With a primarily young audience, this has always worked, but with what we're hearing on III, some will be wondering who the band is trying to target now.

With Dance Or Die, Family Force 5 clearly set their sights on clubs and dance halls with songs like the title track, "Fever" and "Get Your Back Off The Wall," while they stretched themselves musically with even a few ballads along the way. Their Christmas album that followed the next year, along with a remix album of songs from Dance Or Die, captured a more urban flavor and "ghetto" attitude as the band began to move further away from the sound established on their debut. III takes songs like Ghostride The Whip a step further, mixing it with more of a club vibe, but chases after a decidedly more flirtatious approach. Although "Dang Girl" is especially catchy and retains the band's signature chunky synth sound, there's a distinct gangsta rap flavor added to the mix via Josh "Fatty" Olds' vocals on the verses and Jacob "Crouton" Olds' supported vocals. The lyrics are just about as silly as it can get with a musical approach that feels contradictingly more intentional. To make it a little more perplexing, Solomon "Soul Glow Activatur" Olds offers up a ridiculous chorus with "Dang D-d-d-dang girl, you b-b-bang girl... I'm all about you." While listening to this song (and a later track which uses the line "You go bang like a firework"), it's evident that the word usage is intended to be "complimentary" (and not suggestive), but still feels really awkward in the context of a Family Force 5 song. It's as if they've completely forgotten who their original (and possibly most devoted) fanbase is.

"Wobble" is much more classic Family Force 5 but fashioned a bit more for the musical direction they're shooting for. The lyrics go full-on ridiculous (think "Supersonic") as the track introduces a new dance move called the wobble that encourages the listener to "Make it ghetto," "Work it like a model" and "wobble it all night." To close the three-track sampler, "You Got It" throws the listeners for a complete loop in offering up the band's first ode to the Mraz/Mayer urban-flavored acoustic love song that basically tells the object of their affection that "You break necks when you walk by, You got wings cuz you so fly, You don't even have to try, baby you got it... You go bang like a firework, Got flavor like a dessert, Even look good in my t-shirts." Sure, three-fifths of the band is married, but probably less than that number of their fans are and it just doesn't seem as cute and innocent as you might like from a Family Force 5 song.

It'd be unfair to judge their upcoming full-length record on these three tracks alone, but coupled with some other songs they've teased online (including a song about hitting the clubs "Every Night of the Week" and not just Friday nights), this is shaping up to be an album that the band is most likely lining up for a predominently mainstream audience. This original FF5 listener is holding out a hint of hope that there will be some substance of some kind to be found on the new album (a la "Replace Me," "Radiator," "Facedown," "Color of Water," to name a few), but from the look of things displayed on III, all we've got is proof that the guys can tackle even more stylistic exploration... but the lyrical substance is about as packed as the club dance floor at 10 AM on any given day.

Family Force 5's first album was a unique blend of of genres, packing in elements of hard rock, dance, and hip-hop into each song. Their follow up effort, while still a mixed bag, fit a bit more comfortably in the "rock" section of music stores. The latest EP from FF5, simply titled III, draws heavily from the original formula for the first two tracks. "Dang Girl" and "Wobble" both have a very danceable, synth-heavy hip-hop sound to them. In typical FF5 style, the lyrics are fun and often even silly. "Dang Girl" is loaded with sound effects and frequent, abrupt stops. In fact, if you aren't expecting the music to cut out, you might think your disc is scratched. Sometimes the stops succeed at recapturing the song's energy, but it begins to feel a bit overused by the end of the track. "Wobble" has a very similar sound to the first song, with the energetic music and casual lyrics. The final track, "You Got It," is unlike anything FF5 has released before. The vocal style and laid-back music parallels the works of artists such as Jason Mraz or John Mayer. In case there were any doubters left, this once again proves FF5 is capable of successfully creating just about any style of song they choose to. Overall, the EP is a decent one, albeit incredibly short. Diehard fans of the first album will appreciate the return-to-form displayed throughout most of the EP, while the people who were more fond of the alternative side of the band might want to pass this one up. - Jerold Wallace, 4/24/11