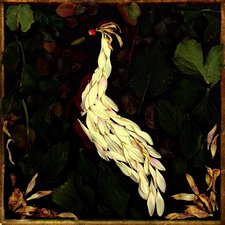 God is not understood; He is experienced. And oftentimes, music is the perfect method to meet God in His presence, letting the ebb and flow of the melodies carry the believer to approach the throne of God with certainty and reverence. When music is written expressly for this purpose, it's all the more imperative to create it well, and that's where an album like Fortunate Fall carries the day. After two albums on Sparrow Records, singer/songwriter Audrey Assad turned to her ardent fans via Kickstarter to fund her next creative work, and her independence has served her well.

After last year's masterful Heart took Assad's pop approach to a whole new level, an album like Fortunate Fall is a curious follow-up. While 2010's The House You're Building drew a fair amount of attention to itself with its reserved nature, Heart seemed to nail down this concept much further, being polished, varied, and crisp in its delivery. Then there's Fortunate Fall, an album that seems to break Assad's own rules. Every track on the album takes the solo-piano approach, with only light instrumentation sparsely filling in, and it doesn't feel very varied in its general structure, sticking to one stream of creativity that drifts from song to song. But that's just what makes Fortunate Fall work so well.

As Assad explained to her Kickstarter backers, her desire was to make "music for the church," and for many, that's a fairly open-ended goal. With worship albums not exactly in short supply, church bands have plenty of material to feed into their Sunday morning setlists, but that's an entirely inaccurate picture of what Fortunate Fall is meant to be. Instead, the eleven tracks here follow a liturgical pattern to usher the believer into a place of blessing to meet God personally. Assad's Catholic background largely inspires this approach, with each song accompanying the believer's own personal time of contemplation and prayer. Every full-length song takes its time to build up the composition, relying on the words and Assad's vocals to carry the weight of the song for its due cause.

With the segues "Oh Happy Fault" and "Felix Culpa" escorting the album through a complete experience, several tracks take outstanding efforts to communicate certain sentiments. "Help My Unbelief" sets the concept up after the intro, proclaiming God to be who He says He is despite any lapses in His people's faith. The unassuming "Humble" basks in the humility of Christ and the inherent need to imitate it, while "Lead Me On" largely stands on the Psalm 23-inspired chorus, "I will dwell in your house forever." "I Shall Not Want" is an especially convicting number with Assad naming off several areas that can paralyze the believer with discontentedness ("From the need to be understood/from a need to be accepted/from the fear of being lonely/deliver me, O God"). "Good to Me" beautifully crescendos from start to finish, while "You Speak" finishes the album with the simple but stunning truth that "in the silence of the heart, You speak." In fairness, however, every song works with the one before and after it to complete the final effect, producing an "album statement" of sorts. By the end, however, it's forty-seven minutes well spent, engaging both the heart and mind in the process.

Captivating at its core and daring in its purpose, Fortunate Fall showcases the independent singer/songwriter with creative energy at full capacity. Fulfilling the definition of a worship album without daring to succumb to the stereotype, it takes the believer down a beautiful path of wrestling with truth and wonderfully surrendering to it. It's abundantly clear that Audrey Assad is a reliably practiced artist willing to continually stretch herself, and in the process, she had outdone herself once again. Easily one of the most unique efforts this year, Fortunate Fall is among the finest achievements of 2013.

After recognizing her gift for leading worship, Audrey Assad declared her desire to make sacred music to serve the needs of the Church, and, backed by the belief and donations of her fans, the fruit of her dream has arrived only four months later. In a climate where making a worship album might be regarded as a marketing move, Fortunate Fall happily succeeds as a beautiful, reverent, and accessible gift of love to the Church.

From the start of the ethereal title track, it's clear this is not a repeat of Assad's previous work. Haunting layers of sound and vocals repeating a chant-like refrain set the tone for the entire record. Rather than the big anthem approach of much of today's worship music, Fortunate Fall slowly unfurls in meditative movements of song and poetic lyricism.

The Augustine quote "God judged it better to bring good out of evil than to permit no evil to exist" is the paradoxical, heady concept driving this record, but Assad turns it beautiful with an emphasis on pianos, strings, and her voice in an atmosphere that allows each piece to glide into the next. The influence of traditional sacred music permeates the songs with mystery, humility and wonder, yet despite the lush and lofty feeling, they are still both expansive and intimate. Right in the record's halfway point is the poignant "I Shall Not Want," a stunning centerpiece that blends elements of ancient prayer with thoroughly relatable longings. ("From the need to be understood / From the need to be accepted / From the fear of being lonely / Deliver me O God...")

Fortunate Fall is quite a departure from Audrey Assad's major label releases, enough to certainly catch listeners off guard if they're expecting a conventional follow-up to Heart. And yet, this is one that joins the ranks of other artful and powerful worship albums, making a wonderful companion to liturgy, personal devotion, and corporate worship of many kinds. Ambitious, vulnerable, and achingly beautiful, this piece of art is a 2013 release not to be missed. - Jen Rose, 8/11/13