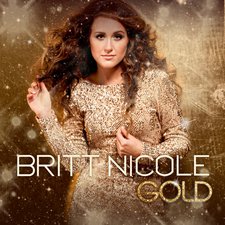 Christian music fans love a good role model. From Rebecca St James' arrival in the 90s to Stacie Orrico and ZoeGirl countering the rise of Britney and Christina in the early 2000s, young girls have had no shortage of positive alternatives to mainstream pop princesses over the years. All too often though, the fans grow up and the music gets swept away in ever-changing trends.

Not so with Britt Nicole. In the five years since her debut Say It, she has continued to be a mainstay in youth-oriented Christian music, though not without a bit of style shifting of her own. The Lost Get Found, while still a pop-heavy record, featured a compelling title track that showed a more grown-up side without denying her roots, and her 2010 Acoustic EP proved the strength of her voice when shiny production tricks are stripped away. In her third release Gold, Nicole returns strong as ever with another collection of encouraging songs that one doesn't have to be a teen girl to appreciate.

Gold is a mix of polished, upbeat pop and passionate, downtempo ballads. A few danceable songs make their way into the mix, but there's a more refined quality to these tracks, following in the steps of "The Lost Get Found." Lyrically, it's standard Britt, universally encouraging, starting with the title track's call to remember "it's your time to shine... you're worth more than gold." It's not all fluff though. The first single "All This Time" is one of her most personal songs, telling the story of how she met Jesus in a warm, accessible way.

For the most part, these songs aren't especially deep poetry, staying close to standard CCM pop fare, but they have an endearing simplicity that has earned her acclaim over the years. Nicole's sweet and earnest singing holds the record together across any genre she explores. Her voice has grown up quite a bit, taking on impassioned ballads like "Stand" or a soulful R&B edge of "Who You Say You Are" with confidence, emotion, and skill. Her youthful quality is still there when it counts though, particularly when she gets going on a catchy processed dance tune.

A few musical surprises hit toward the middle, and actually make the latter half of the album better than the first. "Ready or Not" is a quirky gem of a dance song, with some guest rap by Lecrae to give it a hip-hop flair. The jittery hook is catchy and easy to get stuck in the head. The intense "Breakthrough" follows with an ethereal intro and some similar tricks, right down to a roughed-up instrumental bridge that sounds more than a little inspired by the currently trendy dubstep sound. Anthemic ballad "Stand" takes off with big drums and shows off the powerful side of Nicole's voice, while the dance party ready "Amazing Life" and a few pretty ballads finish out the record nicely.

Overall, Gold is a solid pop album that is sure to please her fans, and it has the potential to win over some new ones. It's not particularly groundbreaking, but it is a fun listen that confirms Britt Nicole is far from a passing fad, but a capable artist that is here to stay.

Britt Nicole's Gold is a fun pop album with some surprises tucked inside. There's a good balance of upbeat songs ("Gold") and ballads ("Stand") and it's evident that Britt maintains her youthful appeal while showing growth in her songwriting. The surprises include rapping from Lecrae on "Ready or Not" and a dubstep bridge on "Breakthrough," which should surprise and please listeners with the interesting addition. "The Sun is Rising," one of the ballads on the album, comes from God's perspective, telling us that He is always with us, and "to look beyond the clouds" when times are tough. The album ends with the Selena Gomez/Rihanna-esque tune, "Amazing Life," and the ballads "Still that Girl" and "Seeing for the First Time." A remix for "All This Time" and an extra song, "Straight for Your Heart," are bonuses on the album. While it's not really innovative, Britt's fans will love Gold, and it should bring in some new fans as well. The slightly negative side is that some of the tracks mimic other secular and CCM artists a little too much. That may be an issue for Britt in the future, if she keeps producing music that's similar to whatever is trendy and not fully developing her own sound. - 4/2/12, Cortney Warner of Jesusfreakhideout.com