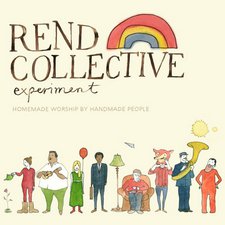 A little over a year ago, we came in contact with a rather different bunch known as the Rend Collective Experiment. Their ability to utilize simple music and profound lyrics to create an organic sound for worship was inspiring to say the least. With their latest venture, they are once again presenting that natural sound in Homemade Worship By Handmade People. However, is this truly a new chapter for the collective or is it simply a continuation of their previous release?

The album opens with the retro-feeling "Praise Like Fireworks." Let it be known that the first ten seconds can sound mildly hokey but the invasion of busy percussion and driving electric guitar transform the song into an excellent track. The wonderful correlation of letting our praise be explosively expressive is a great image to portray while worshiping. In a Mumford and Sons fashion they give a folk rendition of "You Are My Vision" (better known as "Be Thou My Vision"). It is an honest interpretation and it's good to hear folk music--done very well--being used for worship. Along this same stream are "Build Your Kingdom Here" and "Christ Has Set Me Free;" both have that informal feel but are pure worship songs with very raw emotion.

"True Intimacy" and "Desert Soul" feature a more pop-driven feel while remaining very loose. Musically, they are some of the best songs that the Collective has released to date. Thankfully, what keeps them so grounded is the very honest lyrics are highlighted more than the wonderfully performed music. Furthermore, the pop sound expounds on "Keep Me Near." The humble words of surrender are so soothing as the Collective sings, "Rescue me in weakness of mind, when distraction conquers me Keep me near your heart. Keep me near your heart." The integrity floods the song, which is a great example of what separates them from many of the more popular worship artists.

There are some minor setbacks, however, one of which can be found at the end of "The Cost." The song as a whole is strong, but the ending resolves to a slower version and feels like it might make sense during a live worship setting but not so much on a recording. Some listeners may not like some of the underdone production quality, but honestly it's what makes the album that much sweeter. Also, it should be noted that the title of the record is very true; many times the recordings are really being made in someone's home.

So is the album different? Is the Rend Collective Experiment maturing, developing, and making better music? My answer would be an emphatic, "yes." The music is growing naturally. There are some resemblances to their last release, but overall they aren't letting it just stay at the same level. A number of the songs are more accessible to corporate church gatherings, which should make worship leaders happy. Plus, it's really good music. If this is the music they can create in anyone's home, they are welcome to record at my place anytime.

Rend Collective Experiment's debut release was a breath of fresh air in the often over-cluttered world of worship music. Their latest album, Homemade Worship By Handmade People, continues in the vein of their last, with powerful vocal harmonies, brass sections, and folk elements. After the slightly loaded opener, "Praise Like Fireworks," it was exciting to hear "You Are My Vision," Rend Collective's version of the famous hymn, "Be Thou My Vision," with lyrics taken from the original Irish folk song. While some songs on Homemade Worship, such as "Build Your Kingdom Here," and "Desert Soul," have an anthemic feel, perfect for large worship services, the album also has its fair share of songs more reminiscent of the natural, toned down sound found on their debut, such as "Keep Me Near," and "Alabaster." While this collection diversifies from the group's debut and features more folk and grandstand worship aspects, it remains a beautiful compilation crafted by musicians clearly in awe of God. The group's organic, refreshing feel remains intact in Rend Collective's sophomore release. - Review date: 1/10/12, written by Sam Schaumberg of Jesusfreakhideout.com