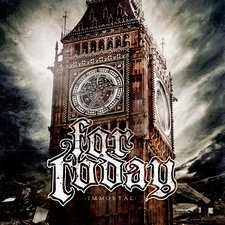 For Today is arguably one of most popular hardcore acts to ever rise up through the ranks of Facedown Records. After releasing three full-length albums with Facedown, the guys got an opportunity to move to a bigger national label, Razor & Tie (alongside Norma Jean, P.O.D., Dave Barnes and more). Almost two years since their final Facedown album, Breaker, For Today returns with a vengeance with Razor & Tie debut Immortal.

"Fearless" opens the album beautifully, with a lot of snare drum and gang vocals and guitars that sound like something you might hear from indie rock band Thrice. Shortly after, it turns into the heaviness you've come to expect from For Today. However, even this early on in the album, it's easy to notice the step up in sound and production that has come with their new record label. In addition, the band sounds as tight as ever, if not tighter. There seems to be a slightly different approach to songwriting this time around, with all-around newer sounds on some songs. I mentioned the real quick Thrice tendencies on "Fearless," and there's also a lot of August Burns Red influence, such as in "The Only Name" and "Set Apart."

Of course, speaking of August Burns Red, their lead singer Jake Luhrs provides some guest vocals in "Set Apart." He fits in very well on the track; if you weren't paying attention as the track played, you probably wouldn't have any idea he was there. "The Only Name" features labelmate Sonny Sandoval; I have to be honest, I had hoped to hear some screaming action from Sandoval, but he provides some chant-like cleans in the background, singing the words, "Eternal One, You stand alone, exalted King upon the throne!" during the chorus. The final track, "Under God," features former labelmate Tommy Green from Sleeping Giant and A White Flag, who joins Mattie Montgomery in tearing up the track with harsh and powerful screams. Green has more of a Hatebreed-esque vocal style, but they fit right in. Montgomery and Green are both very passionate about Jesus and reaching the lost (both have free downloads of side projects through Come&Live!, FYI), and the two teaming up is pretty dynamic.

Lyrically, For Today has always been pretty strong, both in message and in lyricism. Though a song's message doesn't really have much to do with the quality of the song, Montgomery is gifted in both of those areas. However, with that being said, I do find the message standing out a little more than the lyricism, especially in lyrics like "We bear the mark of the uncreated God, so what should we fear? We bear the scars of the holy risen Son, so tell me, what should we fear? Every threat is hollow, because our victory is already set in stone, we are the fearless ones!" from the album's opener "Fearless." The band is very big into motivating fellow believers to live lives worthy of our astounding God, but they also take time for praise in their lyrics. We get a little bit of both in album highlight "My Confession." Montgomery says in the chorus, "Call me a fool for this stand, but I would die for that Man, my King is alive! My King is alive! And He is worthy of everything." The song trails out as he proclaims (or rather, confesses), "And I will hold fast to the profession of my hope, because He who promised is faithful. Time and time again, in my weakness, He's been strong for me. I've not just heard about Him, I've heard Him. I've not just seen evidence of Him, I've SEEN HIM. He's alive, and He's conquered the grave once and for all." These guys are so worshipful with a style that's still, not even in this age, widely considered worship music. And what's even better is that you can tell that they're genuine in what they say. It adds another fantastic level and depth to it.

For Today has grown into a powerhouse of a band that certainly deserves the ears and attention of modern day metalheads. Never heard of them? Immortal is a great place to start. Didn't like their last few albums? This one could change your mind; I wasn't big into their Facedown stuff either, but they've come a long way and have taken their sound and music to new heights. They're also really inspirational, and have left me wondering why I'm not taking full advantage of the love and power Jesus offers all of His followers. If you like heavy music and/or being challenged in your faith, there's little reason to not pick this one up.

For Today had become one of Facedown Record's staple bands, but has recently switched to a bigger label in Razor & Tie. With the change, For Today is now able to reach more people with the message of their newest release, Immortal. The album opener, "Fearless," shows both a positive musical progression as well as the fact that their message is as strong as ever: "We are fearless; fearless. We bear the mark of the uncreated God; so what should we fear? We bear the scars of the holy, risen Son; so tell me what should we fear?" From there, the spiritual message never backs down. As for the music in general, improvement and versatility is shown all around. The band opts for a more "traditional" hardcore sound and, at times, even shows a slight metalcore sound in the vein of Bullet For My Valentine or Memphis May Fire. The massive bass drops For Today had become known for are gone. Fans of their previous works may find themselves a touch disappointed when you can feel that huge bass hit coming, but it's instead answered by chugging guitars. The stuttered vocal effect has also been weeded out and is used only once. The breakdowns are there, but they are not overbearing or too busy. One could almost say they are unmemorable, but that isn't necessarily a bad thing in a genre of music often criticized for breakdown usage. While there are aspects of their older albums that will be missed, overall, Immortal was a positive step and progression for the group. For Today managed to create a slightly different sound to appeal to new fans, but did not alienate the current fan base. - Review date: 5/28/12, Michael Weaver of Jesusfreakhideout.com