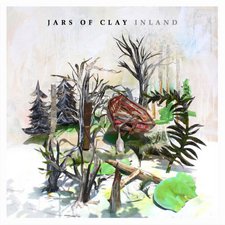 Keeping up with the current is far easier said than done. After almost twenty years in the scene, most bands would have locked onto their sound of choice long ago and stuck with it (if the band was still together at all by that point), but as has been obvious from past precedent, Jars of Clay is not one of those bands. Enter Inland, the band's tenth studio album, which carries the weight of a daring spirit and the prerogative to act on practiced skill. With both the opening and closing tracks of the album released as singles early on, the middle between the bookends is now being revealed. And what a reveal it is; the years of musical excellence just keep increasing.

With 2009's The Long Fall Back to Earth carrying a subtle electronic flair and 2010's The Shelter featuring a diverse and organic musical blend with various artists in tow, Inland doesn't attempt to continue either of these models and does what Jars does best: try something new. Self-producing their material for the last several years, the quartet welcomed famed producer Tucker Martine to the studio for this project, and the difference is absolutely noticeable. Previously producing records for the likes of Neko Case, My Morning Jacket, and the Decemberists, Martine uses his influence to create an alternative musical vibe for Inland that's a fitting new angle for the veterans in their ever-changing creative concept. Both in the big picture and its details, Inland draws upon cohesive methods and keep the listeners on their toes, whether it's the serene strings on "Reckless Forgiver" and "Pennsylvania" (that are ever-so-reminiscent of the band's self-titled debut), the subtle horn section of "Human Race," or the expertly laid bass lines of "After the Fight" and the title track. It's twelve tracks of a version of Jars of Clay that sounds painstakingly familiar, but still as different as ever; admittedly a curveball from what fans could be used to, the sharp differences make Inland a self-contained and distinctive entry in the band's illustrious catalog.

As the foursome treads the ground before them, Inland measures a landscape of sound with valleys and hills in an appropriately mapped-out outline. "After the Fight" starts the album with the most upbeat track of the album to give the newfound journey a kick in the energy with "Age of Immature Mistakes" mostly following suit. By the time "Love in Hard Times" and "Pennsylvania" hit, however, the record slows to a crawl to allow the emotion of the venture to sink in. The explosive "Loneliness & Alcohol" heightens the drama once again before "I Don't Want You to Forget," "Fall Asleep," and "Skin & Bones" calm the storm. By the time the title track closes out the set, the listener feels the end of an expedition, almost too soon after it has started. Throughout this trek, however, Inland captures the human experience in striking ways. "Age of Immature Mistakes" arrests the patterns of young love ("don't know enough about love so we make it up/like hearts in the hands of a child 'til they break it up"), while "Fall Asleep" keeps the tension tight between letting a lover go and holding them close ("I watched as the distance spread as the shadows grew/And the longings came like wolves to devour you/So stay up with me, don't fall asleep/'cause we only have this moment once in our lives"). "Reckless Forgiver" cuts the closest to home, resorting to a frank exhortation for God to enter in one's life ("All I want is peace like a river/a long life of sanity/love that won't leave too soon/someone to pull out the splinters/hey, Reckless Forgiver, you know I'm talking to You"). The ambitious "Loneliness & Alcohol" burrows in the losing edifice of grief, while "Skin & Bones" reassures for a better day to come. While some lines are harder to dissect than others, Inland features some of vocalist Dan Haseltine's finest pennings to date, keeping the band's creative direction hinging on more than just new melodies and instrumental choices.

Original at the core and rooted in practiced experience, Jars of Clay has stayed incredibly fascinating after nearly two decades of work, and it makes an album like Inland all the more impressive. Regular risk-takers from the start, a band like Jars of Clay has had plenty of chances to coast, but Inland demonstrates that the band's identity rests in revitalizing change. Kissing summer off with bliss and excellence, these perennial contenders for best-of-year honors make Inland essential listening for 2013's year in music.