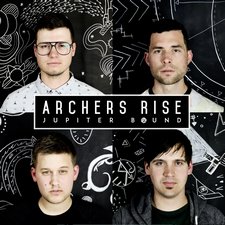 Hailing from the great Pacific Northwest, Archers Rise comes to the table bearing an uncommon offering. Formerly known as "Becoming an Archer," their latest project, Jupiter Bound, is constructing a new standard of quality within the indie rock scene.

Arriving on the heels of their self-titled 2012 debut, Jupiter Bound both raises the bar and begs for attention. While the album capitalizes on an 80's retro feel and dance pop ambiance, it is far from being held within those confines. With the album produced by Jeff Schneeweis (of Number One Gun), frontman Tom Cox (formerly of Falling Up) is joined by Jeremiah Wilson, Matthew Flood, and Lee Edward to craft a memorable EP which will likely serve as a launch pad for even larger projects.

Jupiter Bound opens with their first single, "Sway with Me," a lighthearted track written to create a fun atmosphere and radio playability. The synth-driven title track, "Jupiter Bound," carries a heavier sensation with spiritual themes abounding ("I saw the dragon fall, I saw the saints come home, I saw it all in the blink of an eye"). Originally written to convey a form of symbolism about the band's journey, this song does a perfect job of representing the album, both lyrically and musically.

"Ivy," a song written about Cox's then-unborn daughter, slows down the pace of the album. Lines such as "grace has swept me away / you can fall down, and I will be there / angels surround; you don't ever have to fear" permeate the song and touch the listener with an ethereal melody. "Hello Sweet Pea" is by far the best-produced track on the album. The lyrics are incredibly catchy ("I can see you, can you see me? Imagine us on People magazine"), and the breakdown is masterfully performed and executed. The song oozes professionalism and oddly enough, its timing and instrumentation paradoxically take the stage by flaunting moderation and balance.

"Mirrors" may be the best song on the album, bearing a moody melody and edgier lyrics. The chorus's lyrics, "the beast is coming, you'd better be running / we don't need a fist to fight; we just need souls that cry," deal with the internal struggles and temptations which followers of Christ wrestle with. The song deepens, however, as it flows into the bridge and the lyrics, "when the Blood poured out, when the Blood came down, I'm on the way up, when the Blood spilled out," are sung.

In a fashion typical of Archers Rise, Jupiter Bound closes with "Pockets," a cute love song. The lyrics are simple, yet touching ("this could be a reality, we could dance all through the night, just you and me"), and the melody will doubtlessly be playing in the listener's head well after the album has finished spinning.

In the end, Archers Rise has composed an out-of-this-world project which rivals anything released this year thus far. The musicianship is excellent, and Cox's vocals hit the mark. Even more effectively, all of the band members contribute to the background vocals, and hopefully future projects will feature even more of them. You will be hard-pressed to find an EP anywhere as stellar as Jupiter Bound, and it will be a downright shame if you forfeit an opportunity to pick up this EP.

Record Label: Save The City Records