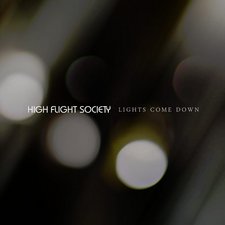 After releasing their first independent EP, Par Avion, back in 2009, High Flight Society has again resurfaced. This time, the rock group is back with a six-song EP, Lights Come Down. The Georgia natives take a different approach on the EP with a less aggressive rock project that feels like a big change of pace from the band's self-titled debut.

However, the EP does open with a lot of energy with "Proof," a fast-paced, intense track that demands several replays. The opening electric guitar in "Direction" is very satisfying, and the rock sound, while not overpowering, has a good tone. But after the first two tracks, the album loses momentum with "Let It Burn," a song without any apparent faults but also one that lacks a compelling tune. "Move Like Daylight" is an enjoyable, upbeat pop rock song that likewise isn't bad but isn't outstanding either. High Flight Society returns with their core rock sound in "Stand Up," but the song doesn't have the same edge as the first two on the EP. The closing ballad and title track of the EP is a solid finale with moments that shine.

The lyrics are a strong spot for the band on the EP as High Flight Society offers up some good songwriting and messages. The singer expresses concern for an unbelieving friend on "Proof" but resolves not to give up on them "till I know that you've seen triumph" ("I'm gonna light the world on fire/Then im coming back for you/You're gonna see this dream was worth it/I'm bringing you the proof"). The title brings to light the prospect of who we really are "when the lights come down," and encourages listeners to "live with no regrets." "Direction" tells the tale of a once enthusiastic soul who is seeking the Lord's guidance after uncertainty.

Not only does the EP boast of solid songwriting like the Par Avion EP, but High Flight Society also has something more to say than simply rocker's angst. However, when it comes to the rock music I was expecting out of the band, I was disappointed that the band wasn't daring enough with their hard music after the first two songs. While I highly recommend fans of the group pick up the first third of the Lights Come Down EP, the next four songs lean more toward forgettable than memorable. But those looking for strong lyrics should pursue the whole package while on the lookout for more music from this talented band.

With High Flight Society still a band in the independent ranks, some could be surprised it's been this long to turn out a project that's yet another EP, but Lights Come Down is a solid six tracks that make their mark effectively. "The Proof" and "Direction" both have their appeal as the heavy-hitting rockers to start off the set, while "Let It Burn" and the title track take things slower, with "Move Like Daylight" and "Stand Up" falling somewhere between the spectrum. As a general rule, HFS's style has evolved since Par Avion from a reckless rock vibe to a better controlled "worship rock" avenue. Still, the progression feels like it's missing something; sometimes it seems as though they are hitting all the right notes but they tone things down just a tad too much where a harder approach would pack a bigger punch. Also, some Esterlyn-esque techniques are seen on the EP (especially "Let It Burn" and "Move Like Daylight), and while the sound isn't appalling, the project does lack maximum impact as a direct result, either as a worship or rock project. High Flight Society is getting very close to finding the sound that works for them best, and the song mix of six is varied and accomplished with their worshipful and meaningful lyrical approach covering all the right bases. Making a musical move that's more edgy and upfront, however, will be the key to taking it to the next level. Nonetheless, Lights Come Down will fill in nicely in the meantime, and any pop rock fan should enjoy HFS's newest collection. - Review date: 12/18/11, written by Roger Gelwicks of Jesusfreakhideout.com