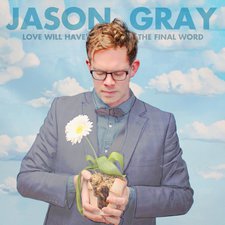 Jason Gray
Love Will Have the Final Word

Despite its victorious sounding title, Jason Gray's Love Will Have The Final Word is a refreshingly honest journey through the struggles a believer faces on the way to finding hope. Comparisons to its acclaimed predecessor, 2011's A Way to See in the Dark are inevitable, considering this is the first album of new, non-seasonal material in three years. In some ways, it's a natural progression, but while A Way to See was carefully balanced between radio-friendly pop and thoughtful singer-songwriter, Love Will Have the Final Word feels like a record for the sake of the art, telling an unresolved story. These aren't songs penned to satisfy a contract, but rather hard-won tokens wrestled to the ground from a difficult place. And for that, it's a difficult album to describe, but probably the most profound twist in Gray's musical journey so far.

When the opener "Laugh Out Loud" kicks the record off, it's with possibly the most quirky, unashamedly playful hook of Jason's career: "Ha ha / Don't it make you wanna laugh out loud?" In some ways, it's almost too lighthearted to believe it came from this normally heady songwriter, but it doesn't take long to get stuck in your head. Then comes "With Every Act of Love," the sort of thoughtful radio pop song those familiar with his music would expect, reminiscent of "Remind Me Who I Am." The ability to boil big theological concepts down to a three and a half minute pop ditty that's shot up the CCM radio chart is an impressive skill indeed, one Gray has proven over and over in recent years.

A strange thing happens beyond the catchy opening tracks and colorful cover art though. By the time "Not Right Now" begins, the radio gloss has flaked off to reveal a somewhat melancholy, raw, and vulnerable record. We've all heard it said that a person in grief needs love more than answers, but this song's poignant lyrics put skin on that truth: "Maybe one day we'll talk about the dreams that had to die / For new ones to come alive / But not right now." Gray sings this unresolved story with a knowing sadness, and here is where the tone of the record is formed. Pain, grief, and hope intertwine, but these songs come from the middle of the story, in the deepest need for the kingdom come.

While the more popular "sad" Christian songs have a hopeful twist at the end, these songs don't always resolve so easily. "Begin Again" is a counterpoint or expansion on the cliche answer that trusting Jesus is the answer to pain, "when everything sad isn't coming untrue," but "I Don't Know How" is nearly despairing in a confession of helplessness: "I know you can fix it, but I don't know how." It's the cry from the depths, not a sigh of relief from the other side. But lest it seem this is all despair, there is plenty of hope to be found. "Even This Will Be Made Beautiful" breaks out in a grand declaration of trust that all will be well, before reflecting on "The Best Days" and celebrating a God who will seek his own in "As I Am." So the cycle returns to the joy of "Laugh Out Loud," but it takes time in the dark to get there.

It's also worth noting the two producers at the helm of this record, hit-crafter Jason Ingram and indie-acclaimed Cason Cooley. With the songs split almost evenly between them, the disparate styles weave back and forth - Ingram's clean and hooky open spaces against Cooley's dense and lush soundscapes - but it takes a keen ear to notice the differences. While the Ingram produced "Begin Again" takes a spacious modern pop approach, Cooley's response "I Don't Know How" has a musical depth and verve that can hold its own against the hippest alternative pop. The result is surprisingly cohesive, pushing Gray's music into more artistic territory, while keeping things interesting and accessible.

Sometimes music is hard to describe, and by the final notes of "As I Am," it's certain this is the sort of album that needs to be experienced and felt more than merely heard, and it wouldn't be Jason Gray's style to offer a batch of trite pop songs to satisfy a contract. Perhaps it's a grower sort of record, one that touches the souls of those who need it most. Gray has always been one for honesty in his songwriting, but emotion sears each track with compassion and vulnerability, an extension of hope and companionship in the dark. To that end, this is an important record, a reminder that all things will be made beautiful in time, even in a world where that doesn't seem to be happening.

A Way To See In The Dark was covered in enough poppy sheen to gain significant radio airplay, but it maintained enough lyrical and musical integrity to earn well-deserved praise as a pure work of art. With Love Will Have The Final Word, Gray has upped the ante even more with eleven contemplations on the topic of love. Opening with the irresistibly joyful "Laugh Out Loud," including contributions of a hammered dulcimer that would have made Rich Mullins proud, Gray does the remarkable and takes seemingly trite lyrics and, through sheer musicianship, turns them into poignant reflections on the Atonement. From there, Gray continues offering his trademark lyrical quality, offering highlight after highlight in the form of the prayerful title track, the honest "I Don't Know How," the autobiographical "The Best Days" and more. In particular, "Not Right Now" is a major highlight, with Gray providing a needed reminder that coping is an integral part of recovery, and well-meaning friends often do a disservice by trying to rush it through encouragement and optimism rather than simply sitting in the ashes with them. But while no track lacks quality or serves as filler, perhaps a couple walk the line of the accessible and the musically generic a bit too close ("Love's Not Done With You," "Begin Again," and "Even This Will Be Made Beautiful" come to mind). If there is one thing Gray does well (amongst all the things he does, in fact, do well), it is to craft music that appeals to nearly all musical audiences, be it the fervent enthusiast, the cynical critic, the casual consumer, or even the simply disinterested. Few faults can be found in ...The Final Word from any audience, and whatever faults do turn up are ultimately downplayed by Gray's sincerity and musical integrity. - Review date: 3/1/14, Mark Rice