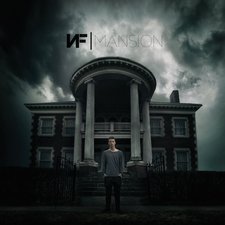 
Last year introduced me to the rapper known as NF, and his small EP was good enough for me to be stoked about his full-length follow-up, Mansion. That being said, I knew I was going to hear something good - really good - but what I've heard is actually something with the words "amazing" and "perfect" written all over it. The idea behind Mansion is an invitation into the mind and world of NF, and the opening track "Intro" (yes, even the intro track is banging and worth mentioning) lays down haunting yet thumping beats with the rapper spitting furiously and impeccably ending the song with "I'm sorry, but I gotta leave and man this track was beautiful. The least I can do if I murder a beat is take the time to go to his funeral." It's just sick; plain sick rapping.

This album is not for those who dig the simple radio-play kind of hip hop heard so often today. This twelve-track ensemble deals with NF's personal struggles through past and present circumstances and is extremely raw emotionally; you can't help but know what's going on inside of his head. The title track is ultra-personal, cleverly entering the different rooms in his house, with each carrying its own memory. "All I Have" comes up next, and those who grabbed last year's EP will recognize this incredibly amazing song along with "Wake Up" a little later. Both tracks are two wonderful additions to this year's release. Later on, you'll catch "Face It," "Notepad" and "Paralyzed," which offer more creative perspectives while touching on life's important matters, NF's detailed musical journey, and the walls of personal numbness that we sometimes hit.

"Motivated" has a stadium rocking edge that offers some of the most clever one-liners I recall hearing being jammed packed into one track, with samples such as "And I suggest you buckle up if you come in this ride. No Johnny Cash, but to some of ya'll, I'm walking the line. But you're wrong though, ya'll look curious, Heath Ledger type of questions like why so serious?" Mansion ends on a much needed and more chill vibe, with guest spots featuring Jeremiah of The Neverclaim in the soulful "I'll Keep On," and Britt Nicole on the powerful and moving "Can You Hold Me." The final track brings a completeness while incorporating soft singing and orchestra strings, and it's the perfect ending to an immaculate album.

The only downfall here will be that some people aren't impressed by such raw, personal, and emotionally-driven rap, but that's exactly what makes this stand out among so many rap albums out today. You can't argue with the tremendous thumping beats and NF's amazing flow when he spits, and coupled with the raw honesty, this definitely becomes one of the best rap albums I have ever heard. I don't hand out five-star reviews very often, but I can't find a single thing on this release that I don't love. This has "album of the year" written all over it.

- Preview Review date: 3/4/15, Review date: 3/19/15, written by Kevin Hoskins of Jesusfreakhideout.com class="coversize" align=right> Early Thoughts...
Last year, I was introduced to the rapper known as NF and his small EP was good enough for me to be stoked about his full-length release, Mansion, dropping later this month. That being said, I knew I was going to hear something good - really good - but what I actually heard has the words "amazing" and "perfect" written all over it. The thunderous, pounding production coupled with an emotionally charged rapper spitting some of the most honest and raw lyrics I have ever heard make for one stellar album. Mansion easily has "album of the year" potential, and NF is one not to be trifled with in this thing called Christian rap... - Preview Review date: 3/4/15, written by Kevin Hoskins of Jesusfreakhideout.com

After fifty seconds of quiet piano and haunting choir, the floodgates are opened with a blaring orchestral burst, unleashing NF's flowing wordplay and intense passion. From this grandiose "Intro," it's clear that we are in for a truly remarkable experience. Mansion is Nate Feuerstein's full-length label debut and he is releasing it as Capitol CMG's first rap artist, which in itself speaks of his ability to turn heads. The emcee uses a mansion as a metaphor for his mind, and on the title track, he takes us on a guided tour. He leads us through the room of regrets where he sleeps, downstairs where he was beaten as a child, and to the basement of busted walls is where he releases his anger. This powerful song sets up a vulnerable framework for the rest of the album as he explores his identity as a rapper, personal struggles, and what it means to be a Christian. NF masterfully crafts his words to pull you into his world, all the while putting your brokenness and pride on the table and implicitly demanding 'what are you going to about that?' Whether he is singing gently alongside Britt Nicole on "Can You Hold Me" or rap-shouting on "Motivated," his voice bleeds with raw honesty and determination. The musical backdrop--comprised of spacious soundscapes and cinematic production--enhances the somber and evocative tendencies of NF's singing and rapping. Every thump on the kick drum, tender piano note, and chilling bow stroke feels incredibly intentional and inspired. Simply put, NF's Mansion is a masterpiece. You do not want to miss this milestone for Christian rap. - Review date: 3/16/15, Christopher Smith

After making his major label debut last year with his self-titled EP, rapper NF is capitalizing on his momentum with his full-length release, Mansion, which has already gotten a lot of positive response, and it hasn't even come out yet. After repeat listens, I don't really understand the hype. NF is a fine rapper, but I'd be hard-pressed to take it any further than that, as he relies more on spitting fast and/or heavy-hitting lyrics as opposed to technical rhyme skills. In addition, he imitates Eminem a lot, not only in sound/style, but also with somewhat angry-sounding bars and a lot of lyrics where he praises himself. Within the first three tracks alone, he talks multiple times about how good of a rapper he is. To be fair, he also shows some instances of humility, such as in the second track, "Mansion," and later in "Paralyzed" and "I'll Keep On" (the last one being perhaps the best song on the album), but it isn't enough to take the bad taste out of my mouth. The self-focused and angry lyrics also continue throughout the album in tracks like "Wake Up," "Motivated," and "Turn The Music Up." Mansion features excellent production sound quality, and the beats are high quality, so if you can find an instrumental version, I'd suggest picking that up. Otherwise, if you're looking for some good new hip hop, skip this and pick up the new releases from Eshon Burgundy or The Battery. - 3/14/15, Scott Fryberger of Jesusfreakhideout.com

"Woah" The very first word I uttered after my very first listen of the very first song ("Intro") on Nate Feuerstein's Mansion pretty much sums up my feelings for this album in the best kind of way. NF is able to convey a rawness and emotion to his craft like few other rappers are able to do, and this is what pulls Mansion into the realm of triumphant debuts. Helping it along is some impressive production that packs almost as much a punch as NF's intensity. Unfortunately, two possibly significant drawbacks include NF's sometimes overbearing tendency to praise his own rapping abilities (contrasting sharply with his humility and self-acknowledged flaws in other aspects of his life), and his almost plagiaristic similarity to Eminem. Nevertheless, Mansion remains an utterly and helplessly enjoyable album from start to finish, and in this reviewer's mind, only those criticisms hold Mansion back from becoming a new gold standard of Christian Hip Hop. - 3/29/15, Mark Rice of Jesusfreakhideout.com