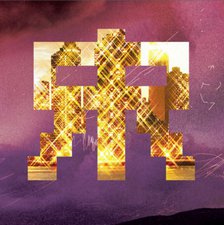 Rapture Ruckus has been making tunes for over a decade now, but have yet to make a serious impact here in the United States. A quick EP back in 2010 grabbed the attention of some, but their fan base is still largely from New Zealand. Now, with a full-length release, titled Open Your Eyes, courtesy of BEC on the way, they have the chance to see what kind of reception their unique musical sound will get here across the Pacific.

The album opens with "This Little Light" which brings a techno infused pop/hip-hop sound type of production. This most unique production will be the strongest aspect of the entire listen. Following are "Going Home," "The Air That I Breathe," and "Tonight," all showcasing those imaginative club type beats and positive lyrics. Those lyrics, while uplifting, don't offer too much depth until you listen to the moving "Open Your Eyes." The song depicts tragedy in the form of storytelling - an art that draws the listener right into the moments being depicted - which evokes a longing to seek the same relief in the Savior; it's a great track. Overall, the first half of the album is pretty good and would be enjoyed most by those who enjoy the club scene type of dance music.

The second half of the ten track album is not as good as the first, however. "All Things New" delivers a chorus that is straight-up corny while the lyrical content on "Back To Earth" is far too simple. The production still carries the same weight, but the writing seems to have dropped off a bit. The only highlight after the fifth track is "Break The Line." The featured beats feel triumphant with the best rap-spit lyrics of the entire listen. Front man Brad Dring has a great talent for rapping, but it is seriously underutilized on the bulk of this album, making this track a standout.

Overall, the pop/techno beats are creative and the lyricism carries a good message to the listener, though they don't necessarily carry the depth that I would prefer. This would be a great album to blast at a club or your next house party, but some may grow tired of half of it fairly quickly.