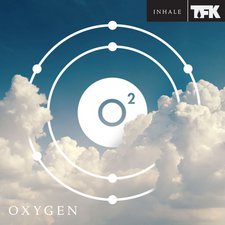 Thousand Foot Krutch joined the ever popular movement of veteran bands going independent with their last album. The End is Where We Begin was a bit of a mixed bag that featured some really enjoyable songs and some others that unnecessarily flashed back to the rap/rock days of Set it Off. OXYGEN:INHALE is somewhat of an improvement, but faces another set of challenges altogether. This is a record that is solid musically but suffers greatly with imbalance.

"Like A Machine" opens the album up with the kind of rocking anthem you'd expect from TFK. It's a good start and is followed up with another solid track in "Untraveled Road," which sounds similar to -- especially in the verse -- to Linkin Park's "Bleed it Out." The rock-fest continues with "Born This Way" and features a groove that will surely have you bobbing your head. The first softer song hits with the pop/rock tinged "Set Me on Fire," but quickly gives way to a harder edge again with an album best in "Give it to Me." "I See Red" is the final rock song on this 10 track album. If you've been keeping track, this means that the final 4 tunes are softer acoustic, piano, or clean electric guitar based songs; thus the problem with imbalance. OXYGEN:INHALE suckers you in with hard rock on the front side, but then lulls you to sleep with much softer songs on the back-end.

Subsequent listens also reveal some other issues. At several times throughout the album the themes found, and even lyrics at times, remind you of other songs. Some examples would be "Like a Machine" with Red's "Feed the Machine;" "I See Red" with Chevelle's "The Red;" or "Born This Way," unfortunately, with Lady Gaga's tune of the same title. These songs obviously don't carry the same exact message, although "I See Red" is really close, but, the themes just feel like they've been done before -- and in some cases done better. Possibly the weakest track is the love song "Light Up." Normally Trevor's occasional falsetto is a selling factor for me, but this particular song is so overloaded with falsetto it becomes overbearing. "Glow" also suffers a bit from this problem as well.

OXYGEN:INHALE isn't a bad record, but sadly it loses some value with each play. Listening to the album on shuffle may be the best option to give you a better mix of the harder and softer music present. With some gems like "Untraveled Road," "Set Me on Fire," "Give it to Me," and even "In My Room," the album is worth a listen or two, but its unfortunate layout makes it more difficult to listen to as a whole than some of TFK's previous works. It appears that the guys are still exploring their relatively new freedom from a record label, but haven't quite put their finger on it yet. Hopefully album number three from the post-label Thousand Foot Krutch will be a homerun.

2012's The End Is Where We Begin was the first result of Thousand Foot Krutch's independence, and it was a very solid one. But other than a slight "back-to-their-roots" infusion of rap-rock absent from their most recent T&N albums, it sounded (and looked) just like their T&N efforts. On OXYGEN:INHALE, though, there is very noticeable change. Their fund-raising method changed (PledgeMusic rather than Kickstarter), their goal was only $1 (since they were focusing on marketing the album rather than funding its production), and the iconic mask-themed album art was history. Musically, while TFK's signature riffs, Christ-centered messages, and Trevor McNevan's instantly-recognizable vocals still permeate the record, it is in addition to a rather eclectic infusion of new sounds. "Born This Way" reveals a very odd combination of TFK's signature rap-rock and country that will leave many fan's heads scratching (but not so much that it cannot be enjoyed). Elsewhere, such as the opener "Like A Machine" or "Give It To Me," TFK channels Disciple's southern rock sound, and while the results are fairly solid, it will, again, catch many fans off guard. But the biggest shock of all, which will surely please as many fans as it doesn't, is the strong contemporary sound (and unendingly-repetitive hook) of "Set Me On Fire," which could fit in on almost any Christian radio station's playlist. Also playing against the album is the relative shortness (10 songs and 37 minutes, both career lows), overall mellowness (the entire latter half contains hardly any rock), and the album's ending (both "In My Room" and "Oxygen" serve as more appropriate closers than "Glow," in my opinion). While I myself love when artists try new things and infuse new sounds, I'd be lying if I were to say all the album's brightest spots were anything but the most classic-sounding TFK tracks (rockers "Like A Machine," "Untraveled Road," and ballad "I See Red"). By no means would I ever use words like "bad," "boring," or "disappointing" to describe OXYGEN:INHALE, but will be very interesting to see the response of the band's fanbase. - Review date: 8/24/14, Mark Rice

Canadian natives and one of Christian rock's most beloved bands, Thousand Foot Krutch, is back with another independent follow up to 2012's The End is Where We Begin. That album marked TFK's departure from longtime label home, Tooth and Nail, giving the band full creative control over their new sound. The reviews for The End were mixed to positive, but it mostly left fans and critics wondering what their next move would be. Oxygen:Inhale answers those questions in a succinct, ten-song package. The result is a classic rock/modern CCM-inspired record that turns a new leaf for TFK. The record offers the electric guitar-driven tracks that TFK is known for ("Like A Machine," "Born This Way," "Give it to Me"), but it also offers a fair amount of softer tunes, more than most TFK records have in the past. The lyrics are typical Trevor McNevan fare: rhyme-infused with themes of faith, identity, and living the life you've been given, all while being quality rock earworms. Hardcore fans of the band will undoubtedly love Oxygen, but it definitely shows a softer side of TFK that casual fans will either embrace, or start looking for other modern rock outlets. TFK has struck a new balance with Oxygen, which should be useful for appealing to a broader audience. Whether it's double dipping in CCM radio or modern rock charts, there is something on this album for everyone. - 11/27/14, Cortney Warner of Jesusfreakhideout.com

Hard rock veterans TFK are consistently making great tunes and are easily one of my favorite bands of all time, so I have been anticipating Oxygen: Inhale for a while now. And upon listening to the first few tracks, I got exactly what I was looking for: Solid TFK rawk tunes superbly done. "Like A Machine," "Untraveled Road," and "Born This Way" all carry that TFK feel: rock tunes filled with powerful chants, hints of hip hop flow, and stellar tracks overall. The second half of the album mostly takes a 180 degree turn from the first half and is filled with mostly slower/ballad tracks, which TFK has always done well. "In My Room" is superb and very personal, while "Oxygen" showcases our literal need of God in our lives in order to exist. Other than a couple of missteps ("I See Red" and "Light Up"), my biggest complaint here is that I needed more "rawk" tunes. With only ten tracks clocking in around 37 minutes, I wasn't expecting so many chill tunes. All that said, TFK fans should all be flocking to grab this release. - 8/6/14, Kevin Hoskins of Jesusfreakhideout.com