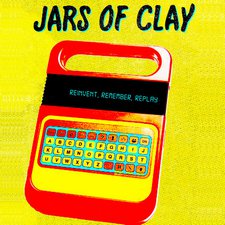 Trust Jars of Clay to go above and beyond on a simple little thing like an acoustic EP. Enter Reinvent, Remember, Replay. Just as the title suggests, these songs are not merely acoustic renditions, but they have truly been reinvented. They went all out in taking these five songs (deliberately selected from among older classics spanning across four albums, hence the "remember" part of the title), and turning them into the auditory equivalent of a gourmet meal. These songs have enough merit on their own that one doesn't even need to hear to original versions to appreciate them. But the people that will appreciate this EP the most are the devoted fans that know and love the originals.

The first thing I was expecting as I started listening to this EP was an adjustment. After all, I've heard the original versions of all these songs often enough that a different version of them could potentially feel awkward and I would have to constantly be comparing the versions. But as the first minute passed, I realized that there would be no adjustment necessary. I will refrain from comparing these new renditions to the classic versions (since they are, well, classic), but let's just say that I could listen to these reinventions all day.

"All My Tears," the dark, neo-gospel cover of Julie Miller's classic from Good Monsters, features a surprise in the second verse when it is sung by none other than the band's own guitarist, Steve Mason. I'd never heard him sing before (though, apparently, he does sing some verses in concerts), and I must say, he sings very well. I would certainly not be disappointed if he sings lead more often on studio albums. The eerier rocker "Scarlet" from The Eleventh Hour has everything stripped away except Dan Haseltine's voice, a guitar and a piano, giving it a sad and nostalgic mood. Then in the midst of an upbeat rendition of the classic hit "Crazy Times" from Much Afraid, a unique twist is added in a synthesizer solo taken straight from the 80's, and I just ate it up. If I Left the Zoo's often under-appreciated "River Constantine," true to its title, has been given a very distinct aquatic feel that sounds like you are in an underwater glass chamber listening to the song. But my personal favorite is the second inclusion from Much Afraid, "Tea and Sympathy." Bearing a demo-like quality, it starts out with just Dan's voice and a piano, and then builds to an absolutely chilling and exhilarating experience. The demo-effect is enhanced by a long, eerie echo which makes it sound like it was recorded in a giant, empty orchestra chamber (in my head I can just see the band on stage with thousands of empty seats all round them and no lights except a single, solitary spotlight pointed at them).

In short, this EP is magnificent. Old fans will love it for the fresh and creative take that Jars has taken for these songs, and new fans will love it for its high quality and captivating sound. The flaws are very minimal, and even the length is perfect, as anything longer would take away from the effectiveness of both each individual song and the project as a whole. Whether you are familiar with the originals or not, from the opening strums of "All My Tears" to the hauntingly epic finish of "Tea and Sympathy," it would be a crime not to give Reinvent, Remember, Replay at least a few listens. Jars of Clay has certainly created a masterpiece that truly deserves to be replayed often.