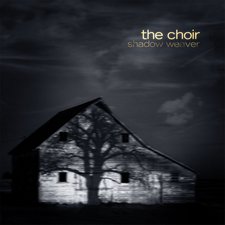 The Choir has enjoyed a long and storied career under the radar of Christian Music, always popular enough to stick around, but never popular enough to break out into the type of wild success experienced by the likes of Jars of Clay, Switchfoot, or Sixpence None The Richer (all of whom cite The Choir as a major musical influence). But that has not stopped the band from churning out many small masterpieces, two of which (1988's Chase The Kangaroo and 1990's Circle Slide) are popular names in the debates of the greatest and/or most influential Christian albums of all time. Although fully independent since 2000's Flap Your Wings, last year, the band turned for the first time to their fans via Kickstarter, earning more than twice their goal required to make both a new studio album and "the definitive live album" of the band's career. And thus, to fulfill the first half of that promise, we have Shadow Weaver.

And talk about melancholy! The Choir has always been a band that has carried an air of dreaminess and sorrow in their music (indeed, Chase The Kangaroo is considered a masterpiece for that very reason), but between the harder-than-ever sound and the overall dark (yet still dreamy) aura, combined with Steve Hindalong's impeccably honest and longing lyrics, The Choir has laid on the mood pretty thick with Shadow Weaver. Is this a bad thing? Most certainly not. In fact, this near-despair type mood may be the very thing that makes this album so worthwhile.

Like an impeccably-crafted concept album, the focus is on the depth of emotions and the human experience from start to finish, brought to life by the album's cryptic bookending title tracks. Among these emotions and experiences are the empty-nester lament "It Hurts to Say Goodbye," the exploration of brokenness in "We All Know," the dual topics of villianization and hero worship in "What You Think I Am," and the playing-with-fire themes of "White Knuckles." Perhaps only once in the album's 57-minute length does the mood lighten, with the album's penultimate song "The Antithesis of Blue," a song in which a loving husband, lost in the wanderings of his own mind, forgets to do a list of things his wife left for him to do while she was out (I would be unsurprised if it is not based on a true story or stories).

While the mood created by the dark and dreamy soundscapes provided by Marc Byrd and Derri Daughtery's songwriting is a very notable plus, without a doubt, Hindalong's thought-provoking and unabashedly alluring lyrics are the biggest highlight to the album. "The Soul of Every Creature Cries Out" is one of the most beautiful and poetic pieces one can desire to hear ("the prayers of every child rise on the winds of tomorrow / the tears of every woman fall on the feet of the man of sorrows / the soul of every creature cries out the heart of humanity moans / somebody in here won't leave me alone"). Both as a storyteller and a poet, Hindalong finds himself among the highest rungs on the ladder of songwriters in the industry, and with Shadow Weaver, it is not hard to see why.

For anyone who has been anticipating Shadow Weaver, I would be shocked to find a disappointed fan among them. Everything we love about Christian Music's most overlooked band is there in abundance and quality, and those who have never before listened to The Choir will probably be allured by it as well. I'll leave it up to listeners to decide how to appraise the album beyond that, but in this reviewer's thoughts, this impeccably written, melancholy storm of emotion and experience is a poster child for quality.

As anyone who's followed Steve Hindalong, Derri Daugherty and their cohorts in The Choir for any length of time will tell you, opinions regarding their finest recorded moment remain sharply divided, and usually come down to one of a trio of albums. The good news, for those savvy enough to appreciate said discussion, is that the group's latest effort contains something for just about everyone, regardless of which of the three camps they happen to inhabit.

The shimmering, eminently hummable "Rhythm of the Road" and "The Soul of Every Creature" are consummately-written alt-pop songs cut from the same cloth as those on the landmark 1988 Chase the Kangaroo project. "Get Gone" and "White Knuckles," on the other hand, have more in common with the harder-rocking textures that fueled the invigorating Speckled Bird album, released six years later. Perhaps most impressive, though, are the mesmerizing title cut and likewise ethereal "Two Clouds Are One" - both of which hark back to the band's brilliant, atmospherically-inclined masterwork, 1990's Circle Slide.

Of course, even in light of Shadow Weaver's razor-sharp pop sensibility, impeccable ambient aesthetic and Hindalong's undeniable lyrical prowess, it seems all but given that news of the most recent release will probably travel no further than the confines of the band's small, but devoted, existing fan base. Which is an absolute pity, really, given the fact that this isn't merely a great late-era effort from the group; it's a great effort, period - and one which proves, yet again, that the muse that rendered the band so singularly poignant when they first made their debut in the mid-1980s, shines just as brightly here in the present day, some thirty years later. - Review date: 7/28/14, Bert Gangl