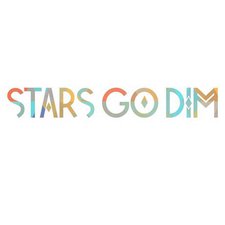 
Founded in 2007 by Pillar drummer Lester Estelle II, bassist Michael "Kalel" Whittig, touring guitarist Joey Avalos, and a new face in Chris Cleavland, Stars Go Dim presented a brand of crossover pop/rock that was disappointing for a Pillar side project. The lineup of the band has since significantly changed, with the only founding member being lead singer Chris Cleavland. Consequently, their vision and sound has changed as well. Now signed to Word Records, the band has cleared the slate and redefined themselves as a Christian pop band. This eponymous label debut released digitally in October to test the waters, but now Word is taking the full plunge with physical CD's.

The multi-colored lettering dominating a stark white background in the album artwork is a suitable representation of the music here; it is middle-of-the-road pop with sleek production. It attempts to follow the formula that has proven successful on Christian pop radio stations and offers little variety over its 53-minute running time. The first few listens through are underwhelming, doing little to capture your attention, however, more time with the album reveals traces of character. The best demonstration of this personality is "Walking Like Giants," in which a bubbly marching beat leads us in and out of a ridiculously catchy chorus that declares: "we're not giving up / when struggles come they're not big enough / there's no stopping us, we're fearless inside / we're walking like giants." This song finds SGD in their most confident state, but unfortunately the majority of the record confines itself to calculated anthemic pop. Songs like "Stars" and "Never Burn Out" are as generic and unimaginative as their titles suggest, and often makes you think of other Christian pop artists. Sometimes these comparisons are general, like how "If It's Amazing Grace" sounds like a slower Chris Tomlin styled song, and other times it can be found in smaller details, like how Cleavland's vocals sound similar to Phil Whickham on "Love That Won't Let Go."

The themes of the album revolve around finding our identity in Christ ("Alive In You" "You Are Loved"), worshiping Him with our lips ("Doxology," "Here") and living life sold out for Him ("24-7"). These are all fundamental aspects of the Christian faith, but the lyrics SGD utilizes to convey these messages are not as significant or comprehensive as they should be, largely because of the album's focus on production and surface-level encouragement. The opening track, "Doxology," the aforementioned "Walking Like Giants" and closing ballad "Here" are notable exceptions. In fact, in "Doxology," Cleavland adds two more verses and a chorus to the famous words written by English cleric Thomas Ken, and it fits surprisingly well with the 342-year-old hymn. Unfortunately, as a whole, the music feels overdone with its grand production; perhaps "Doxology" is best suited for a simpler approach as evidenced by My Epic on Broken Voices.

At its worst, this self-titled album is background filler and at its best, it is catchy formulaic pop. There are certainly a few radio-friendly cuts that either have or will receive radio attention, such as "You Are Loved" and "We Are Giants," but overall this album tries too hard to produce a sound pulled off much better by other artists, even their own label mates for King & Country.

What started in 2007 as a side project that featured Justifide and Pillar alumni has morphed into a radio-friendly contemporary pop band consisting of band members with no known affiliations with any other big name bands. But in the eyes of Fervent Records, Stars Go Dim has apparently done something right, as they've managed to score a record deal with them. However, Stars Go Dim's major label debut is, unfortunately, one more album in an endless sea of contemporary pop albums, with little to nothing to offer on the musical front. It has plenty of moments made for radio, such as the semi-anthemic "You Are Loved," and the upbeat Paul Wright/TobyMac-esque "Walking Like Giants." And then there's the catchy "24/7," which will surely stay in your head with lyrics like: "If all I've got is 24/7, then all I want is every last second to make it all about, I want to make it about You." Out of the near-hour, fourteen-song tracklist, there's one track that sticks out as the highlight; "Where You Are" sticks out because it sounds least like the rest of the songs, with some interesting synth and guitars that sound like something from the 80s. It still sounds very modern as well, but at least they tried something a little different with this track. But at the end of the day, Stars Go Dim is just another album that has come into my ears that I just want to flush out. - Review date: 1/20/16, written by Scott Fryberger of Jesusfreakhideout.com