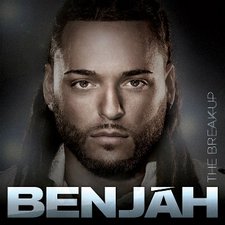 Benjah is more known for his appearances on other artist's albums, more pointedly, the Reach Records family. Benjah has been featured on albums by Lecrae, Tedashii, Sho Baraka, and Trip Lee. On top of being featured, he also has credits for writing, mixing, and producing. He also released an album with reggae namesake Dillavou. The Break-Up is his second solo effort, continuing Benjah's slightly unique blend of hip-hop, R&B and reggae. It's a pretty radio friendly release, but that doesn't necessarily mean it's watered down.

Benjah isn't afraid to add some instrumentation into his beats. Light guitars, piano, and other strings are added in throughout the solid beats contained within The Break-Up. While the hip-hop vibe found in tracks like "Intro," "Sinking Ship" and "Keep Riding" are nice contributions, Benjah truly shines on the more R&B sounding tracks. "Not Alone," which features Rachael Lampa with a very nice assist, is a top track. Lampa's voice compliments Benjah's nicely. They blend perfectly together with the guitar and piano as they proclaim, "I feel it in my soul, feel it and I know that we are not alone. No we are not alone." The song references that no matter what is going on or what hardships we are facing, God is there; we are not alone.

"On Grace I Stand" is another song dominated by piano and strings. The song is an anthem to how great our God is. On the track, Benjah declares, "I may have fallen down, I'm picked up off the ground. The Lord has my hand so on grace I stand." "3rd World" brings the reggae sound in with Benjah's old buddy Dillavou. It seems like any Christian song with a reggae flare features this guy nowadays. The song, which features some of the album's most potent lyrics, says that we as Christians have family worldwide, while focusing on the topic of missions. The opening verse gets in your face with, "Have you ever been arrested lately just for going to church not nothing crazy? Have you ever seen a church burn in flames, just 'cause some terrorist hate Jehovah's name? If you call yourself a Christian, you got family worldwide. I'm saying that our mission should be to hold them when they cry." Though I don't typically get into a lot of reggae styled songs, this one is one of the best I've heard. It's a standout on this album and carries a strong message to support our missions.

Though there is nothing groundbreaking and not a whole lot to make you say, "Wow," The Break-Up is an very solid effort from Benjah. Solid beats, solid music, good spiritual lyrics, and great vocals make Benjah shine most of the time. Nothing really misses the mark completely, but there are definitely some stronger tracks as discussed above. All-in-all, if you are looking for something a little different that the normal hip-hop and rap out there today, you just might want to give Benjah a listen. While there is most certainly a hip-hop element to this album, the R&B vibe is usually overpowering. It's a good sound and I look forward to hearing what Benjah will do in the future. Hopefully he is able to step out of the shadow of being featured on albums, to being a featured artist himself.