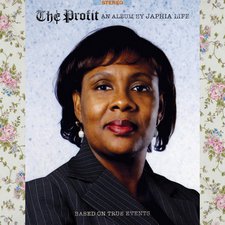 Japhia Life (AKA "Lifey") is returning with his follow-up to 2012's Westside Pharmacy. The Philadelphia-based rapper continues his old-school feel in the vein of hip-hop legends like Nas. Japhia wanted his newest record, The Profit, to reflect the music that he grew up with in the 80's and 90's. As the album cover states, "Based on true events," the lyrics also tell the story of Japhia's upbringing. Speaking of the album cover and Japhia's upbringing The woman pictured on the album cover is Japhia's own mother. In an interview, Japhia said that he realized he mentions his mother in almost every song and that her prayer and concern is what got him to where he is in life now. For him, it was only fitting that his mom be on the cover of his newest album.

As with Westside Pharmacy, The Profit doesn't feature big banging beats indicative of today's hip-hop. Though the beats won't necessarily rattle the glass windows in your car, the music is still quite enjoyable and definitely brings in the elements Japhia was looking for from the 80's and 90's. One of the top tracks, "I Need Water," is just flat out smooth musically. It's the things brought to the table in songs like this that make Japhia Life an interesting artist with something a little different to share. Lyrically, the same song tells the story of how Japhia went from street life and serving the devil to becoming a follower of Christ. The final part of the track tells the story of a dream he had shortly after getting saved. He explains that it was then that he knew that Satan would pursue him even harder than ever. Other standout tracks are "Mystery of SlapBoxing," "Flashlight," "Dayz Back," and "Trap Door." Japhia keeps the music interesting at all times and is more concerned about what he wants to do musically over what's the most popular thing on the radio now. One other interesting track of note is the bonus track, "Might Be in Brooklyn." The song is dominated by an acoustic guitar and has just a light beat in the background. The lyrics are about Japhia spreading the Word, and the music sounds completely different from anything else on the record.

Japhia Life is an extremely interesting rapper who continues to get overlooked by the masses. Most people would feel anger, or resentment, that all of their hard work has gone unnoticed by so many, but not Lifey. His message is positive even though he talks about some darker areas of street life. Japhia's only interest seems to be to spread a positive message, talk about the love of God, and do his part to move our culture forward. It doesn't matter if he's on a major label selling thousands of records, or continuing to plug away as he has for the past 15 years. Japhia's desire to do his type of music may very well keep him out of said limelight, but much respect should be given to an artist that's doing their own thing and not just putting something out there that sounds like everything else on the radio just for a taste of popularity. The Profit is a solid addition to this year's hip-hop albums, and though a lot of CHH fans probably won't even hear about this record, Japhia Life is going to keep persevering. If you're tired of the same beats heard over and over again from different artists, dig a little deeper to discover Japhia Life. It's very plausible that not only will you find enjoyment in The Profit, but you'll probably starting digging for his back catalogue too.