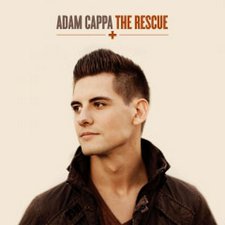 Adam Cappa's debut record, The Rescue, plays like a snapshot of CCM circa 2012. And depending on your viewpoint, this can be either a good thing or a bad thing.

The moment Cappa's voice enters the scene at the seven second mark of the title track and first single "The Rescue," you may swear that you have heard it before. Indeed, it's as if Cappa was designed in a music laboratory deep underground somewhere. Take a little bit of edge from American Idol's Daughtry, add a pinch of that show's 2009 winner Kris Allen (in both vocals and good looks) and add a bit of current tour mate Jeremy Camp's propulsive songwriting and pleading vocals and you have a winning radio formula.

That is not to say that the songs on The Rescue are not pleasant, well-performed or sincere; far from it. Tracks one through ten could each be a radio single and are polished to a shine. "Sail Away" is a well-written song of encouragement to a friend that is reminiscent of Michael W. Smith's "I Will Be Your Friend." "Perfect" has a nifty percussive opening riff that drives the song along, and has an uplifting (and timely) message to youth that in God's economy "you are so much more than you feel, so much more to who you think you are right now" and that "It's easy to say, I know, but you're not alone." This summertime blast of a song portends good things for Cappa's future as a songwriter and is a tune that this reviewer (and father of two young daughters) will likely put into a mix for their future listening. Closing piano hymn "How Great" ends the album well, with its worshipful, vertical lyrics and its ending refrain of "how worthy is He."

The discussion of the manufactured nature of much of modern radio music is worth having, and no doubt will continue on message boards and in other venues for the foreseeable future. But sometimes lost in those discussions are the good-hearted and sincere artists themselves. Cappa's debut album is an over-polished and spit-shined affair, but beneath all of that are some good songs that are well performed and honestly written.

And like the fresh-faced contestants on American Idol, who may sincerely sing pop songs sanded smooth for mass consumption, you can't help but root for Cappa to succeed.