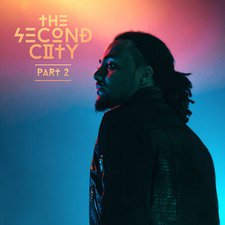 
Steven Malcolm's second installment of the four-part The Second City series continues to prove that the rapper has something to offer the Christian hip-hop industry. While his self-titled debut was a mixed bag of gems and duds, Part 1 showed a more even-keeled delivery, and this next chapter only builds on his strengths.

The Second City has a dual meaning in that it is a reference to his father's heritage of being from Montego Bay, Jamaica, and an illustration of God's eternal kingdom. Malcolm's Jamaican influences add flavor throughout the EP, both musically and vocally. He can easily turn his accent on and off while rapping which aids in the diverse rhythm and flow that he brings to the table. Malcolm's skills as a lyricist and rapper, which have been apparent on several tracks from his previous works, are on full display here. The heavily braggadocious lyrics from his debut are once again toned down which really helps empower the message of grace and mercy in every song. Malcolm digs into his own prideful heart and the sinful condition of humanity and gives a full picture of God's grace. Backed by chest-pounding bass, album highlight "Been There"--which has some of the best bars on the EP-- illustrates this exceptionally well: "Selfish inside / we filled up with pride / we don't wanna serve / we wanna be heard / we wanna be rich / we frown on the poor / look down on the Lord / no trust anymore / too hurt from before / we close every door that lead to truth and revival / truth and revival / we feed off the idols that have consumed us / really the truth is we all have a Judas" and then points to Jesus as the perfecter of our corrupted hearts: "I don't know much but what I do know we're set free / all the captives living in bondage Children we are all His / We are all His." The gospel-centered lyrics throughout the EP are supported with personal stories dealing with lust or what it's like to have an absent drug-dealing father and an alcoholic mother.

Though Steven Malcolm has made a few CCM / CHH crossover tracks, he has yet to be fully embraced by either industry. If "Been There" will be the song to get him more recognition in CHH, then "Even Louder" may just be the big song to do the same in the CCM world. Malcolm delivers two quality gospel-centered bars in the first half of the song with a tribal-like choir singing, "Even if the drums stop beating / my soul will keep on singing / even louder / even louder / even when my eyes don't see / I'll sing till I believe it / even louder / even louder." It comes from the chorus of the recent Word Worship song of the same title, but fits oddly well with Malcolm's style. "Even Louder" has somewhat of a false ending at the three-minute mark, and then a quiet piano, weeping strings, and Leeland Mooring's unmistakable and effortlessly beautiful vocals come in for what feels like a two-minute reprise. It's a little strange that Malcolm doesn't make an appearance after the halfway-point of the song, but it does show that he is willing to take a back seat for the sake of the song.

At times, the beats feel like they are a little dated (for example the fast clicking sound in "On Ten" that was prominent on Lecrae's Anomaly), but for the most part they match the dynamic delivery of the bars and are good for bumping loud in your car stereo many times over. Steven Malcolm will undoubtedly be turning more heads with The Second City Part 2 (even among those who may have dismissed him with "Hot Boy" or "Party in the Hills"), and builds even more excitement for the remaining two parts that will be released later this year.

Steven Malcolm's second installment of the The Second City project is here and the theme explores the hip hopper's younger years, which were full of many hardships, but concludes with the saving knowledge of a relationship with Jesus. The first of the five songs is the title track, and its focus of redemption and seeking light from the darkness is combined with a strong reggae hip hop sound. This musical vibe will be carried though the bulk of this EP. "On Ten" brings great production, has great rhyming flow, and I can imagine listeners chanting "cuz I'm always on ten" especially with overuse of that hook. The same potential problem can be heard on "Been There" with the hook being a tad repetitive at times, but the song specializes on Malcolm going through life's struggles with lyrics such as "friends acting funny, I been there, they just want something from me, I been there" making for a rather relatable song for listeners.

On "Even Louder," the rapper collaborates with Leeland creating a worship tune that I think people will either love or hate, depending on their taste. However, the focus is simple: true grace is found in God no matter our circumstances. "Fuego" (becoming quite the popular song choice for rappers these days) flows well making for another solid track on this short EP. I can imagine many house parties bumping this one for a good head noddin' track all summer long. In the end, this is a solid (albeit short) rap listen, but Malcolm isn't the only rapper going the multiple EP route currently, so the length isn't unusual. If you like your CHH infused with a bit of a Jamaican feel or something that's dance worthy, then this is definitely a project to check out. The Second City Part 2 isn't my favorite hip hop project of 2018, but to be fair, it's been a pretty good year for new tunes so far. - 5/4/18, Kevin Hoskins of Jesusfreakhideout.com