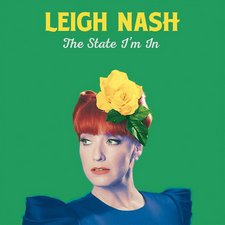 Leigh Nash
The State I'm In


There are some artists that know how to play to their audience. Their music might have no conviction, but it'll be a hit. On the flipside, there are others who have an identity crisis with each album and every release becomes a 90 degree turn into a metaphorical musical ditch. However, like a desert rose, there are the elect few who no matter what they do, it works. They can alter their sound, release albums sporadically or many years apart; they can do no wrong. Leigh Nash is one of those desert roses. Her latest release showcases a sound that many may be surprised by but nevertheless will be pleased with The State I'm In.

The album opens with the whimsical antebellum-esque "Spider and the Moth." It's a gorgeous starting point that lets listeners know that this will not be a Sixpence album, it will not be a Fauxliage album - heck, it won't be a sequel to Blue on Blue - this is something new for Leigh. Musically, it's carried by a honky-tonk piano, gentle strings, and softly layered background vocals. Some may wonder by the end of the track if this is going a country music direction. Spoiler alert: you are correct.

Songs like "Cruel Heart," "Somebody's Yesterday," "The State I'm In" and "High is Better" are pure old-style country music. No, these songs aren't comparable to many contemporary country artists. These harken back to legends like Brenda Lee, Marty Stuart, Patsy Cline and Marty Robbins. Think of the old song "El Paso" with a splash of Nash. Honestly, some fans may have a negative reflex to the sounds of country music, but let it be known that Nash's style makes it not only palatable, but extremely enjoyable. After a few listens, Nash may convert non-believers of country music (and will, like Jesus, lead you to repent of your foolish ways).

For those who wish for that laid back eccentric sound, you will be greatly pleased with the musings of "What's Behind Me" and "Tell Me Now Tennessee." They carry that quintessential sound that made Nash famous: breathy, light vocals and smooth music. Granted, they still do have a pinch of western sunset influence.

Standing out from the collection is the artful "Dreaming Out Loud." Musically, it has a very fluid feeling, like swirling a drink around in a glass with ice. The melody moves up and down with the music as Nash sings, "Holding my breath, making wishes in my head. I wanted so badly to kiss you instead. You kept talking and talking, can't recall what you said. I fell in love and you were just dreaming out loud." The lyrics are melancholy yet romantic. One can only imagine the crowd participation at a live concert; it's breathtaking.

Closing the curtain on a high note is the upbeat "Doing it Wrong." It's a classic way to end a country performance, leaving the audience completely satisfied but wanting more. For the naysayer, if the sound hasn't won you over by the end, you may be hopeless.

Leigh Nash once again proves why so many people fell in love with her sound: it's fresh, melancholy but hopeful, whimsical, and endearing. It's wonderful to have you back, Leigh; I think many a fan will be moving with you in your new direction and be happy with the state that you're in.