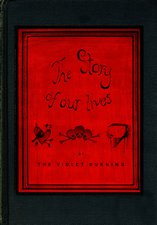 The Violet Burning
The Story Of Our Lives
(3 Studio Albums: The Fantastic Machine / Black As Death / Liebe Über Alles)

Michael Pritzl has unleashed a career-defining album with The Story of Our Lives: Liebe über alles, Black as Death, and The Fantastic Machine. Having made music with a rotating cast of musicians as The Violet Burning for over two decades, Pritzl's latest project is a massive, three disc, 34-song concept album about a character's decision to choose life or death. With a guest appearance by Jeff Schroeder (The Smashing Pumpkins), The Story of Our Lives is The Violet Burning's most ambitious and hardest hitting record to date.

The Story of Our Lives is divided into three parts (each disc is a different part). The first disc, The Fantastic Machine, introduces listeners to the story's character and follows him as he struggles with life, God, and the decision over whether he will ultimately choose life or death. The Violet Burning have at times flirted with the heavier side of rock music, but here they cross into Sabbath-tinged metal, a natural fit for Pritzl's powerful voice. The music helps reinforce the theme and allows The Violet Burning to expand its sound into new territory. Because this is a concept album, the songs are designed more to progress the story than to stand out on their own. However, the two "Br0ther" songs on this disc are some of the most biting commentary on the Christian entertainment industry/Christian culture in recent memory. Pritzl compares the industry to 1984's iron-fisted Big Brother, and the songs feature a robotic voice making promises of wealth and fame while Pritzl sings, "I'm still looking for Jesus." Disc one ends with the haunting "Leaving (but I don't want to leave you)" in which the story's character chooses death.

Disc two, Black as Death, explores the results and consequences of the character's decision to choose death. This disc features the heaviest music of the album (although it still has its quiet moments). The character, having chosen death, tries to make sense of the confusion and chaos that has now become his life. In the acoustic "Where do We Belong?," the character longs for God and asks over and over "where do we belong?" The rest of the disc portrays God's pursuit of the character and the character's recognition of his need for God.

Liebe über Alles (German for "love above all" or "love more than anything else"), the third and final disc, is the quietest of the three and sounds more like The Violet Burning's previous albums. In this last chapter of the story, the character realizes that God has been with him from the beginning and turns to praise Him. There are some beautiful praise and worship songs here, and after the sonic blast of the first two discs, it's nice to have a disc that is softer. The story ends with nine-minute track "Made for You," a worship song that is among The Violet Burning's finest.

The Story of Our Lives is Michael Pritzl's greatest musical accomplishment and succeeds where many concept albums fail. It repeats key musical and lyrical themes and phrases while maintaining song variety and tells a story without getting convoluted. Some may find the album daunting, and indeed it is, but it is worth the time it takes to listen to and digest it. Digital music and the age of downloading has made listening to an album in its entirety in one sitting a rare occurrence, but this is the kind of album that demands and rewards it. The liner notes enrich the listening experience by featuring beautiful illustrations, and the special edition packaging is arranged like a classic book. The Story of Our Lives is a story of struggle, pain, death, beauty, and redemption. It is the story of us.

Disc One: The Fantastic Machine