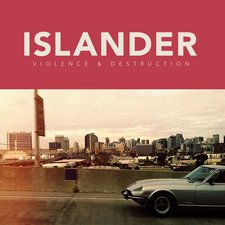 Islander is one of Victory Records' newest signings, but you won't get that typical "Victory" sound from these newcomers. The staple genre for the now widely known label is metalcore with a strong side of hardcore. With an album title like Violence & Destruction, one would expect to get a heavy dose of chugging and screaming, but instead you get a sound much more along the lines of P.O.D; in fact Sonny Sandoval even makes an appearance on the back half of the album. But while you don't necessarily get what you expect from your everyday Victory artist, you actually get quite a bit.

Admittedly, when I first heard the blend of nu-metal and rap-metal I cringed a bit. There is a reason this sound had a very brief peak in the 2000's and why so few bands actually survived. After I made myself sit down and give it a legitimate shot, I found myself pleasantly surprised. These guys seem to have a solid grasp on the best parts of the genre. The guitars are chunky, the drums, while not overly impressive, groove nicely, and the vocals are honestly spot-on. Thankfully, Islander chose to not have a DJ involved in the band and decided to focus on the instruments.

The album opener, "Counteract," is a track to quickly take notice of. It's one of the best sounding tracks musically and features the vocals spectrum for the genre: The normal gruff singing, some rapped pieces, and even some screaming. "The Sadness of Graves" follows and is another fine example of what the genre should sound like as Islander adds to their bag of tricks by including some more melodic elements into the mix. Shades of P.O.D. and Deftones are clearly heard here. Their lead single, "Pains," is another notable song despite its darker tone, "I see corpses upon corpses; these streets are paved with bodies." "Kingdoms" breaks the mold a bit and offers something softer than the rest of the bunch, but features a nice rocking end. The heaviest and most frantic song is easily "Side Effects of Youth," but for my money the best of the bunch is "New Wave." Musically, it's on the softer side, but the open and melodic chorus is addicting. Three of the final four tracks are more hard rockers. "Mira," the short and soft, spoken word track, is the only one that isn't. "Criminals" is the track where you will find Sonny's guest spot and it's a perfect place for him as the song definitely carries a P.O.D. vibe. "Hearts Grow Cold" and "Violence and Destruction" are two more solid tracks to close out a pretty solid debut for these Victory rookies.

Violence & Destruction isn't a perfect record, and is by no means the best nu-metal or rap metal material I've heard, but Islander has put together a really solid collection of songs 13 years or so after the genre died. The group and music are definitely inspired by two of the best to do it in P.O.D. and Deftones - also two of the bands who actually survived when the scene crashed in the mainstream. In turn, they have crafted an album with the best of what the genre had to offer. The sound is definitely dated, but it does carry some modern edge as well. Perhaps Islander will usher in a new period of nu-metal bands storming back into the spotlight. Nu-metal fans aren't going to want to miss this, but the album is still accessible to those who enjoy hard rock. This record is an interesting one, but definitely one worth checking out.