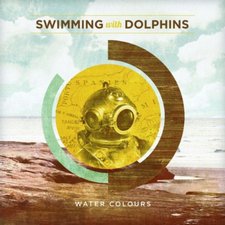 Synthpop outfit Swimming With Dolphins found its way into a Tooth & Nail contract this past June, after the departure of Adam Young, leaving Austin Tofte at the helm. Tofte's previous EP (also his first release), Ambient Blue, wasn't technically released through T&N, but the signing gained the EP a bit more exposure. Fans also grew more excited for SWD's first T&N release, which was soon thereafter titled Water Colours. On May 17, the fans can get their hands on it, and what they'll get is a good dose of 80s-influenced synthpop.

Ambient Blue, though completely drenched with potential, was a very underwhelming EP. It wasn't very memorable, but it did seem like an okay start for Swimming With Dolphins. The Adam Young touch was very apparent, but Tofte definitely found a way to make it into his own. Water Colours takes the same approach, with a slight Owl City influence, but bears more of Tofte's own style than anything else. What is Tofte's style, you may ask? To get right down to it, it's a very 80s-esque sort of synth pop. It's like he took the sounds of New Order and Dead or Alive and modified it with a more modern approach to dance music, as well as a smoother voice (albeit a voice laced with autotune; sometimes too much autotune). "Happiness" gives off a sound like that of Duran Duran, with the exception of the female vocals, as opposed to Duran Duran's deep, manly vocals. There are also a couple of occasions where the synth sounds like it could have come straight out of an older Sonic the Hedgehog game. Prime examples of this would be "Sleep To Dream," "Diplomat" and "Good Times" (those who spent a good portion of the early 90s playing the Sega Genesis games will probably get what I'm talking about).

Sometimes, when Tofte is performing the vocals, the sound resembles that of The Secret Handshake (when TSH was doing the electronic thing). He's a good singer, and I do enjoy his voice most of the time, but his voice can be annoying as well, such as the weird way he sings in "I Was A Lover." It's hard to explain what it is, but it sounds like he's trying to imitate someone else instead of singing in his own voice. In addition to Tofte's vocals, the songs "Holiday" and "Sleep To Dream" feature vocals from a young lady named Sarah Beintker, who is also a regular in the Swimming With Dolphins live band. Other guest vocalists include a singer who goes by the moniker Sunsun in "Happiness" and a very disappointing verse from an untalented hip hop artist named Mod Sun in "Good Times."

Arguably, the best song on Water Colours is the opening song, "Holiday." Not only does it properly get the album going, but it's also just an overall good song. The lyrics are really thoughtful and perfectly capture real emotions ("Does anything feel strange? 'Cause you're like a perfect dream and I'm afraid to awake, I'll lose it all somehow, 'cause ever since you came, I've been living in a holiday"), and they're sung over a very dreamy landscape with a new-wave-style beat and some addicting synth. The inclusion of Beintker very appropriately turns it into a great duet. In "Easy," Tofte declares that "if you want a love that's easy, I would rather have nothing." It sounds odd at first, but that statement feels like it comes from a very mature standpoint. Everyone thinks they want an easy relationship, but an easy relationship requires no effort, work or sacrifice, which are the things that show the other person how much you really care. "I Was A Lover" sings of remembering a lost love, and then jumps into the worshipful "Captured." Tofte offers himself to God, singing "You've got me down on my knees, my heart is Yours and I am captured, so wrap Your love around me, I wanna stay inside this rapture." I would've liked to have heard a less-autotuned voice singing in this song, but regardless, it's a good song to sing to God.

The main strength of Water Colours lies in the music. The synthpop is fun and reminiscent of the 80s, a decade which produced a megaton of great hits. The lyrics and vocals are pretty good, but mostly find themselves taking a back seat to the music. I like a lot of the things that Tofte sings about, and the way he sings (Most of the time, anyways. There's an unfortunate profane use of "hell" in "Diplomat" with the line "I wonder why the h*ll it took so long for me to recognize"). Beintker also adds a lot to the songs she sings in, making them more enjoyable. I even liked the appearance from Sunsun, though I know nothing about her own music. I very much could've done without all the autotune on Tofte's vocals, and "Good Times," one of the weakest tracks, would've been slightly better had Mod Sun not made any sort of appearance. "I Was A Lover" is the other track that appears to be pretty weak, right there next to "Good Times." They both fit well on the album, but are both very easy to skip over as well. Water Colours is recommended for fans of Owl City, New Order and possibly The Echoing Green.

When Swimming with Dolphins initially signed with Tooth & Nail Records, critics wondered if the quality of the music would drop due to Adam Young's absence. Many saw the success of Owl City and quickly linked it with Swimming with Dolphins' original sound. Without Young, many individuals felt that the band wouldn't sound the same. After listening to Water Colours, it's safe to say that this is true. Swimming with Dolphins' debut is different, and it might even be better. What Tofte has accomplished is amazing to say the least. Not only has he created a strong debut album, but he's done so in the shadow of his more famous superstar former band mate.

One of Water Colours' greatest strengths is its diversity. Tofte accomplishes this primarily through the use of guest vocalists on tracks such as "Good Times" which features a Mod Sun rap. In addition, there are multiple female vocalists found on songs such as "Happiness" and "Holiday," a quality which fits well with Swimming with Dolphins' live band, a group that includes two females. Like Owl City, the music is primarily electronic based, yet Tofte's vocals set an entirely different mood than Young's. Softer and more relaxed, Tofte injects a level of emotion that only seems to become stronger when complemented by his guests. While most of the tracks on the album are about relationships, leaving little overt spiritual content to be found, Water Colours is a collection of songs that listeners can relate to. It would be interesting to see Tofte attack a wider variety of subjects on his next album, but it wasn't completely necessary this time around as he's just beginning to explore his sound and style on his own. While not perfect by any means (the album includes a questionable use of the word "hell"), the future of Swimming with Dolphins is bright and defiantly outside of the shadow of Adam Young. - John "Flip" Choquette, 5/15/11