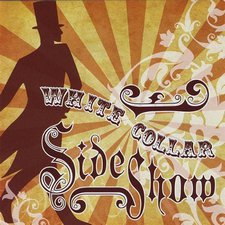 White Collar Sideshow is an act like few others. Their live performance is very much a unique and impactful experience, but it doesn't really translate the same way when listened to as just an audio album only (especially if you haven't seen the live show yourself either). Their self-titled debut album is made up largely of a bunch of drums and other percussion instruments and sounds (like a large saw or bicycle spokes) with the exception of one track that is just piano. The instruments on each track are accompanied by vocal audio clips from vintage films that are sometimes hard to understand but you can get a lot from them when you do hear what they're saying.

The opening track, "Birdfed Thru IV's," has a nice welcoming with a "how do you do?" and then the band takes you on a journey through their fast drums beats. "A Shameful Apprentice" takes you through a prayer that is accompanied by only piano, which makes it a pretty intense track on the album. You can really feel the earnestness and longing for God to help overcome struggles and addictions. The song "Surrepitious Descent" has a line in the beginning where you hear one person ask another person, "Are these people alive or dead?" and the reply is "We don't know." This is true about people, if we really think about it, for the times when we see random people on the street we don't know if they're alive or dead spiritually on the inside.

"The Parasite Matrimony" has an acoustic guitar being played near the beginning which gives this track a little more flavor than some of the others on the album. The first thing said in the actual song itself is "You have created a monster and it will destroy you." This once again alludes to a struggle to overcome sins that befall us as humans. Near the end of the song is another good line that says "Look up, lift up your head, you will succeed. Be confident of this one thing: That God who has begun a good thing in you will complete it." The last song on the album, "Pardon Thy Monster," says "The persons who have recently died have been returning to life," giving us a comfort that even when we feel dead inside, we can be brought back to life through Christ.

Overall, this is a great album with a great meaning, however, it's not really the type of album that you would listen over and over due to it only being five songs and the overall frenetic sound of it. But I do recommend that you go to Come&Live!'s website at www.comandlive.com and download it for free, or you can give a donation and support this band's ministry when you download it.