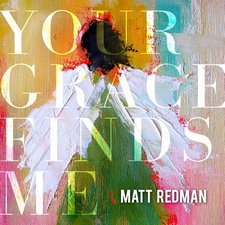 Matt Redman is at a career high-point, following the unprecedented success of 10,000 Reasons and its Grammy awards, Billboard award, and Gold certification. Your Grace Finds Me is poised to continue the wave, and though it has its weaker moments, there is much to be celebrated on Redman's latest.

The album opens with handclaps and guitars strumming at 100 beats per minute in a rollicking celebration appropriately titled "Sing and Shout." Your Grace Finds Me is a live album, continuing Redman's trend from 10,000 Reasons and so many Hillsong albums before it. It was recorded at a conference for worship leaders called LIFT, and the format works great for songs like "Sing and Shout." Many others would fare better in the studio, however. "Mercy," in particular, is a beautiful song that begs for a clean studio release. The tag at the end ("May I never lose the wonder") is nice, but it suffers from the "Repeat-tag-ad-nauseam" formula that pervades modern worship. Repetition can work in corporate worship, when appropriate, but it gets annoying on albums, when listeners might feel obligated to listen through to the end from some sense of duty even though they want to press the button for the next track. A studio version would probably have been a bit truncated, and better for it.

The title track shows what separates Redman from so many cookie-cutter worship songwriters. The first word is a pronoun without an antecedent, describing something equally present in the helpless cry of a newborn baby, the rising sun, and dark shadows of sorrow. The chorus then speaks to the temporal ubiquity of this phenomenon called grace and its tipping point: "From the creation to the cross, there from the cross into eternity." Finally, this magnanimous grace is made personal. It finds us, individuals, tiny elements in this broad space and time. A breath is taken four minutes in before the song builds into a repetitive bridge. The language sounds a bit cliché at first glance, but it's actually interesting in the way it pulls the song into our response: "I'm breathing in Your grace, I'm breathing out Your praise."

It's to be expected from the Redman/Tomlin/Stanfill triumvirate that songs on solo releases have been or will be released on Passion albums. Here, only one song is recycled: "Jesus, Only Jesus," a fairly simple hymn describing the attributes of Christ. Note the cleverly placed line from "I Stand Amazed in the Presence." It's likely that "This Beating Heart" will be featured at Passion conferences in the future, too, assuming a good banjo player is along for the ride.

The banjo actually shows up on couple of songs here, and though it works, it ventures dangerously close to the derivative. The Mumford-Lumineers-Decemberists train is fairly far from the station, and while Christian music has never been accused of leading the stylistic way, the genre as a whole has been doing a better job of avoiding the blatant copying of sounds and trends about three years after they were popular in the mainstream.

All told, Your Grace Finds Me is loaded with quality but is a bit uneven. "One Name Alone" in particular is a misstep, with an awkward set of truisms about praise that don't actually work in a praise song. "Wide as the Sky" essentially presents repeated variations of two sentences, one 12 words and one 10 words, for close to 5 minutes. On the other hand, "Let My People Go" follows the social justice theme of "Twenty Seven Million" from Redman's recent compilation album, tackling human trafficking and slavery with a defiant anthem.

When it works, the album works exceedingly well, and Redman continues to grow as an important and valued praise and worship songwriter. Many of these songs will certainly impact the church, consistently pointing believers to our God and the grace that spans a universe to find us.