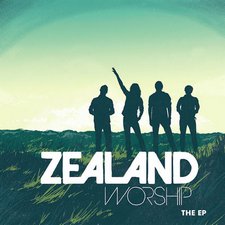 
Those who are still mourning the changes to the current Newsboys lineup have had many opportunities to assuage their grief with the many releases of former Newsboys Peter Furler and Phil Joel in the last few years. Both artists (and longtime friends) make music that instantly brings to mind the classic albums of their former band, yet sound fresh and exciting as well. Joel's new project, Zealand Worship, (a name that tips its hat to Joel's homeland of New Zealand) has the Newsboys DNA thoroughly embedded in it (as have most of his solo albums), yet still makes for a compelling and enjoyable listen.

Opening instrumental track "Awaken (Prelude)" builds at a nice pace to explode into track two, "You Awaken My Soul." This song draws out its length with a nifty bridge and choral ending, and what could have been a simplistic, three-minute worship tune turns into something a bit more interesting. "Good Good Father," the EP's first single (and a late addition to it), is a swirly bit of heartfelt worship that frames the notion of the fatherhood of God against the tough connotations of what some know their fathers to be. Joel has been writing about the subject of fatherhood (and absent fathers) as far back as the song "Always" from the late 90's Newsboys album, Step Up To The Microphone, and incorporating fatherhood imagery into a worshipful song is a nice move.

"Savior" show a nifty touch with the lyrics, such as "we are found, still you are chasing us, we alive but still you're reviving us," and demonstrates a veteran approach to worship music. "Greener" uses nature imagery to assert that "every test we go through, our roots grow stronger and deeper into you, and though the rain may not fall, our leaves turn greener than they were before."

By the time "That's Who You Are" rolls around, the anthemic formula starts to wear a bit thin, but thankfully final track "Lead Us To Your Heart" ends the EP well with a slow build of a song that explodes in the second half, then ebbs and flows tempo-wise till a superb rave up and quiet ending close out the set.

Zealand Worship may be a "new" band on the scene, but Phil Joel is a veteran songwriter whose songs here are meatier and craftier than the average worship tune. Zealand's first EP is a welcome return from an old friend.