Megan Duke is a former worship leader (Prestonwood in Plano, TX) with a huge voice. Megan says that even though she has been singing and leading worship most her life, it was 2015 in Indianapolis when she finally realized her true calling. Her debut album, Heart on Fire, tells about her journey and what she feels God is unleashing on the world. Her music is a blending of modern CCM, modern worship, and some gospel that she calls soul/pop. Her voice is powerful and draws you in as you listen through the thirteen tracks.

The album starts with the gospel-inspired intro, "Something's Coming," as a declaration that Jesus is bringing change in a big way. It's a short track, but it sets up the remainder of the album nicely. Duke is diverse, but deliberate, in her sound. Songs like "Set My Heart of Fire" encapsulate the modern worship sound, "Coming Alive" is a beautiful piano ballad, "Psalm 45" is a scripture reading mixed with an instrumental, "Mighty One (Malia's Song)" features a huge guitar hook that offers a major change of pace, "Let Your Light Shine" gives you a great pop song perfect for CCM radio, and "Joy" finally has the full-on gospel experience that is only teased here and there beforehand. The album manages to blur genre lines, but is also able to fit together as one cohesive project. The track order is exceptionally compiled and allows for an excellent flow with no jarring shifts -- even when styles change up a bit.

Lyrically, Megan Duke tells of Christ's love and praises Him, but avoids a lot of the same tropes so commonly found written repeatedly in today's worship music. "Even in the Dark" is one of the better examples of Duke's song writing as she sings, "No more confusion and no more distance. No more hiding for You are with us," "No more division and no more hatred. Our war is forgiveness. Your blood has healed us," and in the chorus, "There's a light shining in the darkness. There's a fire burning in the night. There's a love stronger than injustice. There's a power that overcame the world." Sure, we've all sung songs about Jesus being a light in the darkness, but Megan's take is a deeper look and exploration of what that means. This type of lyricism floods the entire album, and when coupled with Megan's voice and conviction behind it, it is most definitely moving.

Megan Duke says that we were made to praise God and to see "Jesus moments" turn into "Jesus movements." I feel that her debut album expresses her vision and calling perfectly. It's rare to see an indie artist with this much experience, but it certainly shows in the finished product. The production is through the roof good, the music is excellent, and Megan's voice is an outstanding centerpiece. I'd highly recommend "Coming Alive," "To the End," "Mighty One (Malia's Song)", or "Even in the Night" if you're looking for a place to start. However, this album is perfect for the person who likes the sound and vibe of modern CCM and worship, but wants to hear something new and interesting. I predict big things in the future of Megan Duke and hopefully her message will spread far and near.

With a whole host of accolades to her name, Megan Duke's debut solo album has a lot to live up to. And thankfully, Heart On Fire is an impressive collection of praise & worship and pop songs that's easy on the ears and heavy on the joy and worship. The most impressive aspect for me is Duke's vocals; she's a powerhouse singer and really nails it when the songs call for big and loud singing. There are some quieter, more intimate moments that don't hit quite as well as those anthemic, passionate moments, but they're still enjoyable and can certainly give way to really sweet moments of worship. The album is similar in nature to what many churches and worship collectives are putting out these days, which should make it an easy fit into the collections of many CCM fans. Some personal favorite tracks are "All To You," "To the End," and "Even in the Dark," which are all really encouraging and display the loving relationship because God and man. Heart On Fire is a well-produced album that goes above and beyond to provide not only an authentic worship experience, but also a pleasant listening experience. - Review date: 5/1/20, written by Scott Fryberger of Jesusfreakhideout.com 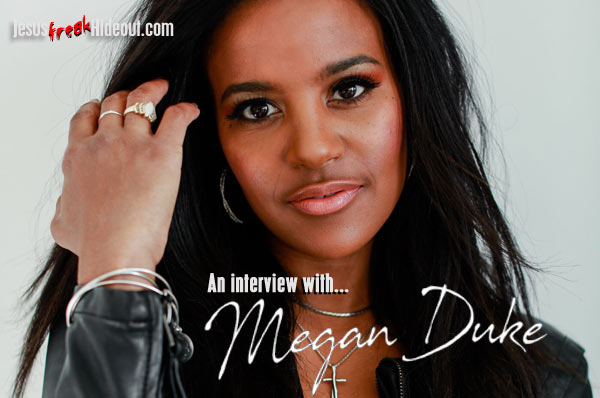 Megan Duke: Yes. Yes. Yes I will never forget this day. But first some context. In short, my whole life up to that point, musically, I knew I was gifted at singing and had ministered and performed all over the country on tour, in churches, and various festivals. I knew that singing and worship leading was what God had for me, and so did everyone else, but I never was able to fully align that with Gods specific mission or purpose He had for me. For me, leading worship and making disciples/community transformation were separate things. However, on that day of the city-wide gathering in Indianapolis it all came into focus together. As a black woman in America, the tensions have felt higher this past decade than I have remembered growing up and I felt deeply the pain and cries of my brothers and sisters. During this event, there was a demonstration just before I began leading worship and I literally laid out prostrate on the concrete weeping and saying, What should I do, what should I do, help me God! Part of me wanted to join the demonstration, and I could feel the generations of pain and cries for justice. But then God spoke, not audibly, but I heard it all the same, This is why I have made you, to bring peace, to bring revival, to bring healing, to sing light into the darkness, and to turn broken hearts to beautiful King. And so I did, I rose up and began to sing with all my might, tears in my eyes. All of the signs and protests stopped. My voice reverberated off the buildings. And white and black came together and worshipped in unity and the presence of God changed the entire atmosphere immediately. I can no longer look back. I want to see His Kingdom come and disciples made. Home to home. City to city. Nation to nation. Until there is no place left.

Megan: Heart on Fire is not a lifetime of work, but one my family and team are incredibly proud of! We believe this is only the start, with so much more to come, but this album has honestly documented our journey the last 7 years of our life. We began songwriting 5 years ago with no intentions of an album, but simply writing what God was doing, speaking, and working in our home and community. Just over a year ago, we decided it was time to begin sharing these songs with the world and we put together a deliberate plan to do that to the best of our ability with what we were given.

Megan: The entire flow and story arc of the album was always at the forefront of our mind in crafting this work, so we knew we wanted an interlude that allowed the listeners to breathe, reflect, and connect with God in a more intentional way. As we prayed about which Psalm best connected the dots both from the story arc of the album and threaded the needle for Scripture that best spoke in that moment we collectively landed on Psalm 45. Not only did it have Mighty One and My heart is on fire in the text, but it also was a triumphant Psalm that encourages the listener to take their gaze vertically to behold our King. Its this beholding that sets ones heart on fire.

Megan: Believe it or not, this entire song (lyrics and melody) was written by our 4-year old at the time, Malia Faith. She spontaneously sang this song over her infant brother as a song of healing. He had kidney and heart issues while I was pregnant and was miraculously healed. The faith of a child! With our producer Leo Flores, as we thought about the genesis of this song, we wanted to capture the upbeat and childlike nature of faith that contrasts a lot of prayer for healing we see demonstrated (and not to minimize, just different) that is serious, intense, or somber. We felt this captured that feeling and moment w

Megan: I am glad you felt that, too! This song has some DEEP roots to it. My husband wrote most of this song while in Iraq in 2015 during the reign of ISIS in Mosul, Erbil, and Duhok. He was training locals on disciple making and church planting, while spending time with refugees who had been most ravaged from ISIS. The song was birthed through a life-changing conversation with an Iraqi, Waleed. Waleed had everything taken from ISIS  money, home, job, some family, everything. But said it was because of this he finally realized Jesus was all he needed and now was sharing Jesus with everyone. In his own words he described that he had forgiven his aggressors and that they had awakened the church. He said, We know we will win this war, because forgiveness is always stronger than killing. That night, as my husband reflected on this encounter he penned those lyrics that reflected the state and the heart of these noble refugees and we are still serving them and walking with them to this day.

Megan: 100%. We are in conversations with a few groups right now and are very optimistic about touring both in 2020 and 2021. We cant wait to get back out on the road, engage all the incredible people we love, and investing into our beautiful cities

Megan: Yes, thank you. One thing our family has on our hearts consistently is our why. Making a career out of music is a wonderful thing, but it is not our why. Nor is it this albums goal to simply gain traction, although of course we hope it does! Our heart is simple we want to empower people from home to home, city to city, and nation to nation be so overwhelmed with who Jesus is, what He has done, and what He will do when He returns that they will carry forth his Great Commission. We believe there is no greater way to empower others to see this, believe this, or walk in this than through writing songs about that very thing. These songs we sing are not theory to us, but it is our lifestyle and we want others as they Behold the King to forsake the world, multiply His Kingdom, and keep their eyes on Jesus. This is the very essence of Heart on Fire. We pray people experience and hunger for this through every lyric, every melody, and every song.