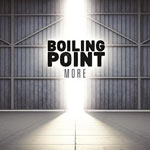 Rock music is alive and well. Indie band Boiling Point is a prime example of this, especially with their latest release, More. The album opens with the guitar shredding title track. Musically, the production quality is at full capacity and sounds like something that could be heard any day on the radio. The theme of the track is pretty obvious, as lead singer Eric Biorklund sings, "We were made for more," and calls people to rise above circumstances. This premise of overcoming adversity is carried through the album, especially on "Brand New Day" and "Stay With Me." "Put Your Hands Up" is a pure pump-up song but doesn't really feel like anything more than a filler track. However, I'm sure it's a fun song to hear during a live performance. Showcasing a softer side to the band are songs like "When You've Lost It All" and "Ordinary Girl;" their sound resembles what has been released in recent albums by bands like The Museum and The Afters. More concludes with the contemplative "Reason." It's a somewhat melancholy way to end the album as it contrasts with the title track. Instead of reiterating that "we were made for more." it asks for a reason for the life that we live. The contrast is kind of nice to hear but also makes the theme feel purposefully disjointed, which is confusing but intriguing. The truth is, Boiling Point has got the full rock package - killer guitar licks, excellent versatile vocals, slamming drums, and you can feel the music in the speakers. Lyrically, the songs don't sound too different from what may be heard on any mainstream radio station, but as this band is growing and maturing, they have the potential to become a staple band within the CCM scene. Folks looking for some good solid rock with a positive twist will find exactly what they want and need with this album. - Review date: 8/30/14, written by Ryan Barbee of Jesusfreakhideout.com

No stranger to the limelight, having played their share of big music festivals, indie pop rock band Boiling Point is ready for their next full-length album, More. It's easy to see why the band is popular; their style of music blends poppy hooks and enough alternative rock elements to keep it from being a straight pop album. I can picture this music being consumed by a wide number of Christian music fans. Musically, More is pretty solid, with tracks like "Stay With Me" and "Leave It All Behind" featuring some of the album's best musicianship. "Stay With Me" almost sounds like what you'd get if you mixed House of Heroes with a little hint of Stellar Kart (but only enough to add the pop element to it). The album does have its setbacks as well, though. Nothing too major, but they're fairly evident. There are times when lead vocalist Eric Bjorklund's vocals don't seem to fit the music too well. His vocal style is akin to Kutless' Jon Micah Sumrall (albeit poppier), and the music doesn't really follow suit. It's noticeable mostly in the first song, "More," which has potential to leave the listener dismissing it from the start. But as More progresses, Bjorklund begins to sound more in tune with his surroundings (until the painful chorus of "Put Your Hands Up," that is. It's a good song otherwise, but the chorus of "Put your hands up, put your hands up, come on, put your hands up! Are you ready to go?" doesn't fit the song in the slightest). "When You've Lost It All" is also a notable misstep; it's a paint-by-numbers AC radio contemporary pop anthem that comes directly after a very upbeat rocker (using the term in the relative sense). It's easily the weakest track on this album, and it's surprising, as they end the album on a similar, downbeat worship song and, this time, it's actually not bad. While areas of improvement are clear and necessary for Boiling Point to make a truly great album, their hard work in writing these ten songs ended up making More into a rather enjoyable album. I would recommend it to fans of bands like Phao or A Rotterdam November, who would probably enjoy this album more than most. - Review date: 8/9/14, Scott Fryberger of Jesusfreakhideout.com 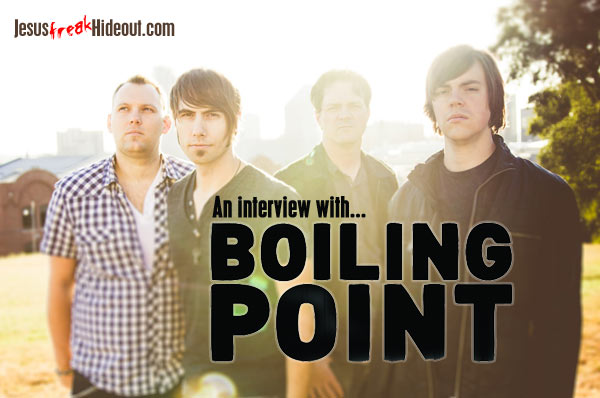 Eric Bjorklund: For all four of us, music was a big part of our lives growing up. We all followed different paths, but those paths eventually came together and led us to form Boiling Point as a way to share God with other people through music. I had the opportunity to travel and do music in different places: I worked as a musician in New York City for a while, then did a program in Colorado for worship leaders. While in Colorado, I felt a pull to form a band back in Minnesota, and Boiling Point came into being soon after that. I had some original songs, so we got together and worked them up for a local battle of the bands. We struggled a bit initially, but with some hard work and perseverance, we grew to the point where we are blessed to be getting some amazing opportunities.

Eric: Thanks for the compliment! The recording process was probably equal parts frustrating/challenging and exciting/fun! Frustrating for the fact that we were pushed very hard to write the best songs possible and then back those songs up with a great performance in the studio. It was exciting because even when there were times we wanted to pull our hair out, we could tell that this album had the potential to change our future as a band and great potential to reach people. That made the whole process very fun - when you have to stretch to go to the next level is when you grow and succeed. Even though we are an indie band, I think this album is up to par with bands that have major label backing.

Eric: I can only speak for myself, but the song that impacted me the most in the studio was "Goodbye." My brother (the drummer) and I had lost our mom to cancer less than 9 months before recording that song and I had a tough time getting through the verses without being really emotional. In a way, every time I sang those verses, I felt like I was saying goodbye to my mom all over again. So singing those lines and melodies over and over was very hard for me.

Eric: In all honesty, we are trying to provide a message of hope and grace through our music. Sometimes, that takes us to a lot of different kinds of venues because we want that message to be available to all. As individual band members, we have all found hope and grace through Jesus Christ and we hope that our lives demonstrate that same kind of love and compassion. At the same time, faith is frequently something that develops over time, so we hope to plant as many seeds as possible with our music. We hope the fruit of those seeds leads to bigger questions about God and faith.

Eric: We have had the honor to play the Sonshine festival main stage in Willmar, MN a couple of times. That has to be one of my favorite venues to play because it was so surreal. Our dream has always been to play on that stage someday. When "someday" became "today," that was a pretty cool moment in life because it showed me that with some hard work and dedication, many things that seem impossible, can be possible.

Eric: I think the best way to answer this question is by talking about an article I read a few days ago in my local paper. The headline of the article was Young girls asking the world: 'Am I ugly?' and the world answers. In the article, it talked about a 13-year-old girl who had posted a video on YouTube asking the general public if she was pretty or ugly. The girl got all kinds of feedback and sadly a lot of it was negative. The song "Ordinary Girl" is about empowering girls to know that they are beautiful regardless of what people do or say about them. I can't imagine how hard it would be to be a young girl growing up in this culture. One thing I do know, however, is that we all have unique gifts, unique talents and a unique future in which we can use those things that God has given us for a unique purpose. I don't believe that people or the gifts given are accidents. I believe we all have a purpose for this time and place and I hope that when girls listen to this song, they feel empowered to know that they are beautiful just as they are and that they have a hope and a future that needs their talents. I also hope the song conveys that we are all most beautiful when we own who we are every day.

Eric: If we ever HAD to do a world tour, it would be amazing to do it with the band Switchfoot. Those guys are the real deal. If we ever have the honor of being as successful as those guys, they are definitely the model for how we would choose to be as a band - completely humble and willing to talk to anybody. It would be crazy amazing to do a tour with them.