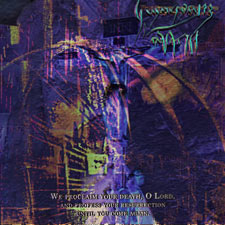 Reverorum ib Malacht
Vacuum. The mystery of faith. We proclaim your death oh Lord, and profess your resurrection, until you come again.


Most black metal bands built upon a pagan ideology would probably call it quits if the creative forces behind the band became devout converts to Christianity. Despite finding themselves undergoing this exact ideological shift, Swedish band Reverorum ib Malacht pushed onward, creating music that now flowed from their newfound faith. For many within the black metal scene, expressing Christian sentiment is antithetical to the genre, and is enough to disqualify any band from bearing this label. Perhaps in part due to this potential for rejection, the band has had little reason to conform to tropes of the genre for their own sake. Make no mistake, every release in Reverorum ib Malacht's catalog bears the immediate sonic markings of black metal, but over time, it has evolved into something truly unique.

Vacuum. The mystery of faith. We proclaim your death oh Lord, and profess your resurrection, until you come again. (or, for the sake of my keyboard, just Vacuum) is divided into four tracks, each slightly exceeding twenty minutes. Despite such lengths, opener "1a10" wastes no time in showing listeners what to expect. The track dives straight in with harsh vocals and dissonant guitar riffs backed by machine gun drumming and glitchy effects. It's an overwhelming experience that rarely lets up. Spoken word samples from preachers sounding like mid-20th century radio revivalists prevent the wall of sound from seeming totally monotonous, while borrowed elements evoking other extreme metal genres (such as the old-school death metal riffing at 11:20 or the grand atmospheric choir around 16:00) add a sense of musical progression. Finally, at around eighteen minutes in, the song undergoes a dramatic stylistic shift as the guitars fade out, until only heavily processed percussion remains.

Each of the other three songs share similar musical DNA with this opener. "1b10" builds from a much slower, almost sludgy base into an almost upsettingly dissonant climax, while "1a12" and "1b12" experiment a bit more with the genre's atmospheric side. Throughout the album, the screamed vocals remain entirely unintelligible, leaving the clips of spoken word as the primary tool for the delivery of any sort of message. While the exact content shifts between soundbites and songs, a repeated sample of "Jesus is alive" forms a continuing thread between them. It's perhaps a surprisingly hopeful message for an album as sonically dark and chaotic as this, but certainly a welcome one. Another noteworthy aspect of this release is the production. While Vacuum embraces much of the instrumental clipping and lo-fi roots of black metal, it is done in a tasteful and intentional way. While every individual tone sounds raw, the final product allows each instrument to sit clearly in the mix. It's a nice nod to the origins of the genre without sacrificing quality or sounding like a bedroom recording.

Overall, Vacuum is an album that grandly accomplishes what it sets out to do, both as industrial black metal and as a proclamation of Christ, and easily sits among Reverorum ib Malacht's most compelling releases. However, accomplishing these goals and making something that will appeal to a wide audience are far from the same thing. Each song feels like several minutes could probably be shaved off without compromising content or cohesion. With a total runtime exceeding an hour and a half, the album can feel quite bloated and repetitive at times, and the continual harshness of both the musical composition and production makes for a truly challenging listen. For those who find black metal too abrasive, Vacuum is probably not a record that will change many minds. Even for those who venture towards the edges of extreme metal, the sheer volume and relentless pace found here may be off-putting. But for listeners inclined towards experimental metal or harsher expressions of industrial, there's more than a few treats to discover on this record.