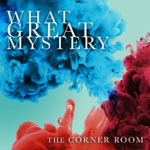 The Corner Room
What Great Mystery

Earlier this year, a young folk band by the name of The Corner Room released their debut album, Psalm Songs, Vol. 1. With a strong collection of songs taken straight from the Book of Psalms (word-for-word), the idea of more volumes was an enticing one, to say the least. Though a second volume is surely in the works, The Corner Room is already at it again with a new EP, called What Great Mystery.

Unlike the band's Psalm Songs album, What Great Mystery does feature some entirely original material. The Corner Room actually wrote two of the five songs on this EP: "What Great Mystery" and "Unworthy." The former leads us off with a noticeably different sound than you'd expect having heard Psalm Songs. Sounding more like something from Citizens & Saints' first album (before "& Saints" was added to their name), "What Great Mystery" explores the truly mysterious fact that Jesus loves us in a mid-tempo, indie/pop rock song. "Unworthy" is a little more on the folk side, but still retains some of the indie sound, and could probably also appeal to fans of Hillsong Worship's slower ballads. Unlike the title track, which was led by singer Jon David Connelly, "Unworthy" is led by a young lady named MK Whatley. Whatley's voice doesn't really sound strong enough to be in a position to provide lead vocals, though her voice does sound better in the chorus when it's layered over some other background vocals.

The main lead singer, Adam Wright, steps in for all three of the other songs here, which are all hymns. The first of the hymns is one called "O God Be Merciful To Me." The most versatile of the five songs, The Corner Room created a bit of an interesting combination, with some tropical percussion and background melodies underneath a gorgeous bluegrass covering. Some of the other band members really shine here, with excellent mandolin and fiddle stealing the show. Continuing to dig deep into the hymnal archives, we're treated to a wonderful rendition of "Thy Works, Not Mine, O Christ," which turns out to be really soft and tender, with a beautiful cello and a very subtle banjo. A very worshipful track, indeed, and it leads into their own take on what has come to be known as simply "Doxology" by most of the bands that have done it. The bluegrass sound from "O God Be Merciful To Me" resurfaces here, but in full force this time around. The band seems to have been having fun playing and worshiping while recording this song, and the slow fade at the end, while the band is still jamming, makes me wish I was watching them when they recorded it just to get more of it.

The Corner Room is still a relatively new band, but with this new EP added to the full-length they've already given us, they're already proving themselves as a very solid worship band. I'd be very pleased to hear this band on the radio, or to even hear that they got picked up by a major label if that's what the Lord would have them do. Though I'm still looking forward to Psalm Songs, Vol. 2, the What Great Mystery EP proves to be a solid release for the interim.