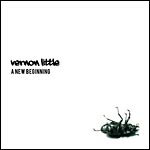 New York-based pastor and hip hop artist Vernon Little has been involved with hip hop music since 1985. With a long history of the music under his belt, he's scheduled his latest solo album, called A New Beginning, for a November release. The first thing to say about A New Beginning is that you can definitely hear his 80s roots throughout, from the beats and music to Little's rhyme style. It's pretty old school, with a flow that can best be described as a tamer and less-refined Run DMC. To his credit, his flow does work well enough for most of the beats. There are a couple tracks that have decent beats, but the majority of the beats have poor production. The beats in "Words To Live By" and "Proverbs" halfway remind me of those old pre-programmed beats you could find on electronic Casio keyboards. It's in these tracks that Little's flow tends to be a lot weaker. While A New Beginning doesn't display Little as all that good of a rapper, it almost feels like the strength of his flow is directly proportional to the strength of the beat. At least, that's how it seems in this batch of tracks. The beats are all pretty under-developed, but the stronger tracks are in the first half of the album, with "Double Minded" starting off the weaker portion of the album. As far as lyrics, he's focused on spreading the message of the Gospel; however, some of his message seems more like milk than meat, making it difficult to really get a whole lot out of it. For instance, in "Words To Live By," the lyrics "Cause gettin' to Heaven is the purpose, and in the end it'll all be worth it" place more emphasis on the destination rather than developing a relationship with our Savior Jesus. Another example is "Double Minded;" I like what he attempted to do with the song, rapping from the perspective of a so-called Christian who spends his life indulging in sin but goes to church on Sunday. While the idea is good, and we all know there are people that live that lifestyle who need to hear the real message of Christ, the finished product is less-than-impactful, with a lot of the sins being mentioned in an almost one-liner sort of presentation, rather than a convicting one. In the end, Vernon Little's album is, unfortunately, pretty weak. With close to thirty years of hip hop under his belt, I expected to hear an emcee who would just about be an expert on the microphone. It almost seems as if Little just hasn't adapted with time; as I mentioned, he tends to keep the overall style in the 80s hip hop realm. The old school sound can be done well in today's culture (see Theory Hazit's EP The Rock Is Steady), but it takes some skill and a lot better production than what Little has here.